Those lost in the 2nd World War (Click to expand)
At the time of Gildersome's own dedication ceremony (1923), it was the nation's fervent hope that humanity had learned a terrible lesson and that those commemorated would be the last. Tragically, twenty five years later, the Second World War claimed the lives of another thirty three Gildersome men. Their names were added to the dedication side (south) of the memorial. Next year, 2019, will be the 80th anniversary of the commencement of that bitter conflict .
In a dedication ceremony on the 12th May 1923, presided over by Lieut. Col. Bousfield, Gildersome's War Memorial was unveiled.

The following account of that ceremony was published in the Morley Observer on the 18th: 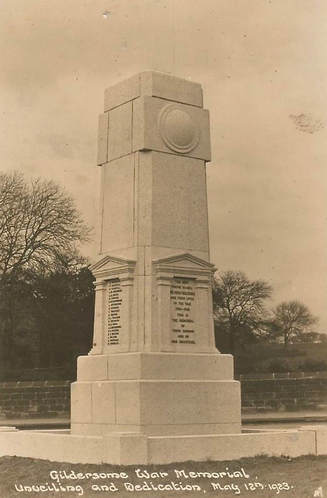 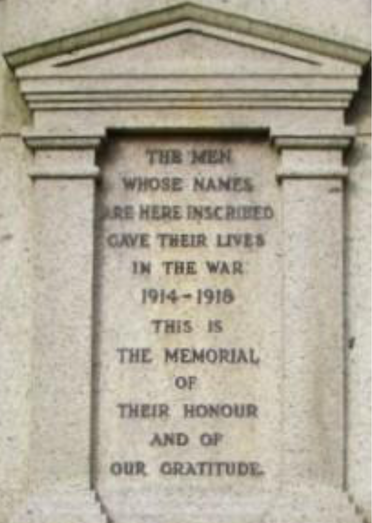 READING OF THE ROLL

Lieut. Wilson then read the roll, and said, "The men whose names are here inscribed gave their lives in the War 1914-1918. This is the memorial of their honour and of our gratitude." The names inscribed on the roll are: -- W. Armitage, T.O.H. Bates, A. Bedford, W. Beevers, H. Best, F. Blythe, A.J. Brown, L. Bywater, F. Clay, A. Connell, H.S. Crowther, L. Crowther, F. Fowler, W. Garforth, G.H. Haiste, F.H. Hall, T. Harris, F.W. Holmes, J. Hudson, J. Hughes, G. Jagger, G. Johnson, J.W. Kellett, J. Lightowler, A.E. Lockwood, F. Manners, A. Marshall, H. Mitchell, W. Mitchell, M. Morgan, E. Naylor, L. Naylor, N. Naylor, H. Nicholson, J. Nisbet, F. Ogden, J.W. Parker, C. Popplewell, L. Ramsden, J.T. Rawson, E. Robinson, F. Scargill, G.A. Smith, R. Sowden, C.W. Stephenson, L. Stephenson, H. Steward, F. Thackray, H. Thresh, M.L. Toulman, B. Ventress, W.M. Ward, A.E. Waterhouse, M.O. Watson, E.V. Watson, J. Wilson, A. Wormald, W. Wormald.
Two buglers of the Leeds Rifles then sounded the "Last Post," and after a minute's silence of remembrance, the "Reveille" was sounded. After the singing of "For all the Saints" the benediction was pronounced by the Rev. F. Hurst.
The first wreath was placed by Councillor Brooke, on behalf of the War Memorial Committee, and Councillor Seed also placed a wreath for the Council. On behalf of the ex-Service men Pte. Swaine laid a floral tribute at the base of the memorial, and then followed a sorrowful procession of the relatives of the fallen. Some of the children were carrying sheafs of wild flowers, which were placed alongside expensive wreaths from the places of business, clubs and religious institutions of the village. The service closed with the singing of the Hallelujah Chorus by the augmented choir.