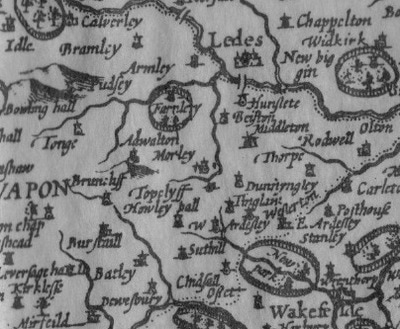 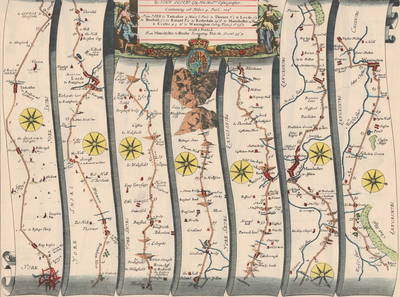 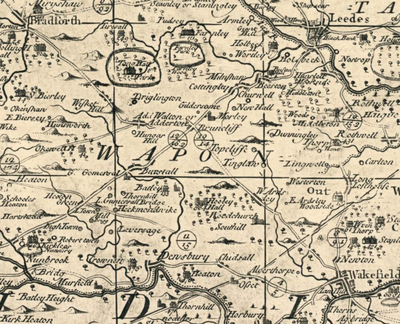 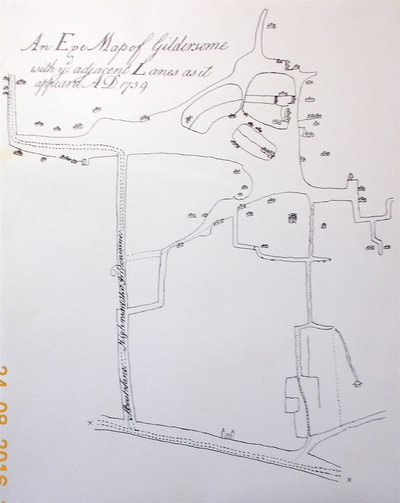 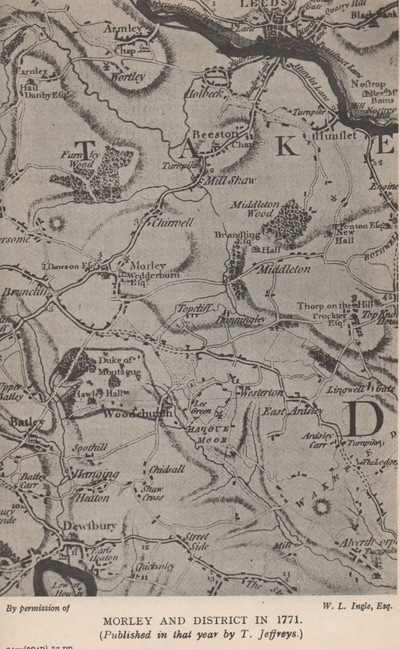 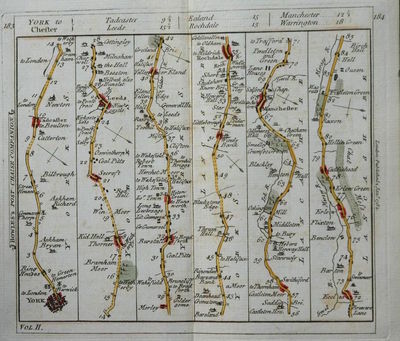 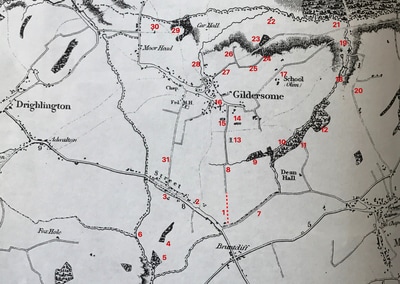 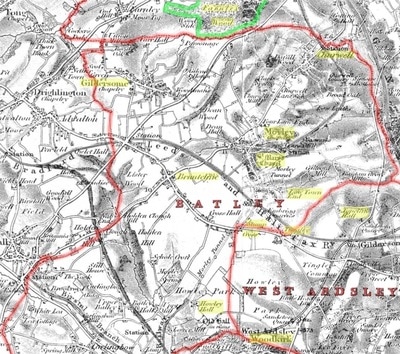 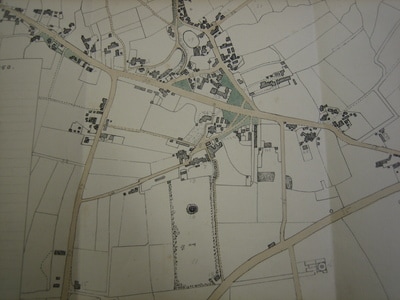 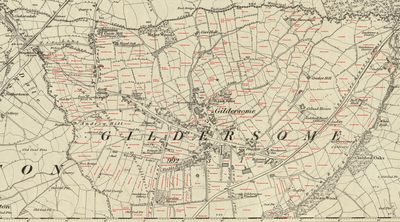 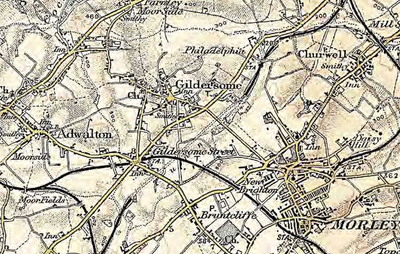 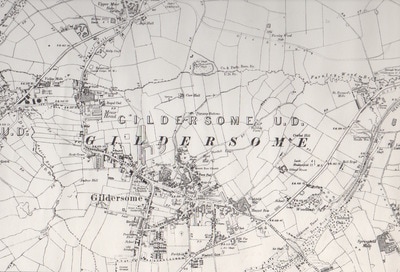 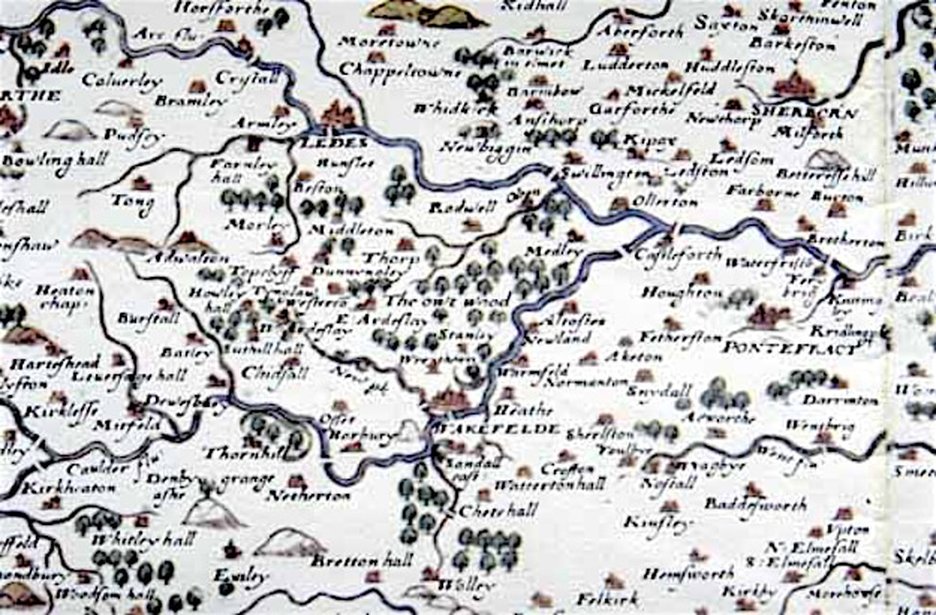 1577 Map by Christopher Saxton  (a portion) Morley is below Ledes. Farnley Wood is shown above Morley and Gildersome would have been to the left of Morley and below Farnley Wood. I took the following from the Leodis Photographic Archive "Saxton was brought up at Dunningley in West Ardsley. He was educated at Cambridge University and then served as an apprentice map-maker to John Rudd, the vicar of Dewsbury, around 1570. Saxton is famous for making the first national atlas and his great achievement was noted by Queen Elizabeth I. She gave him the rights to publish his maps in his own name in 1577 to avoid plagiarism.  Saxton has since been described as ‘the father of English cartography’." 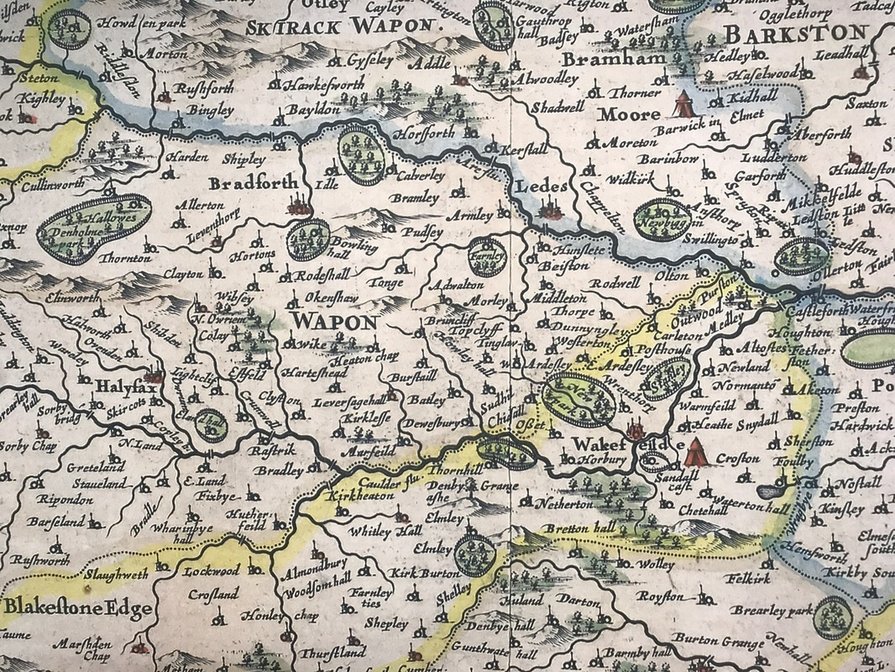 From ​"The West Ridinge of Yorkeshyre with The most famous and fayre Citie of Yorke described 1610" :
In this portion of the map of Yorkshyre, the Gildersome area is almost dead centre in the middle of the map. Gildersome, of little consequence, is not shown. Adwalton and Morley, each having a church, are depicted and Bruntcliffe (an important crossroad) is present even though it's of lesser size.
​                             From a parchment reproduction that I own. Click on map to see the full version. 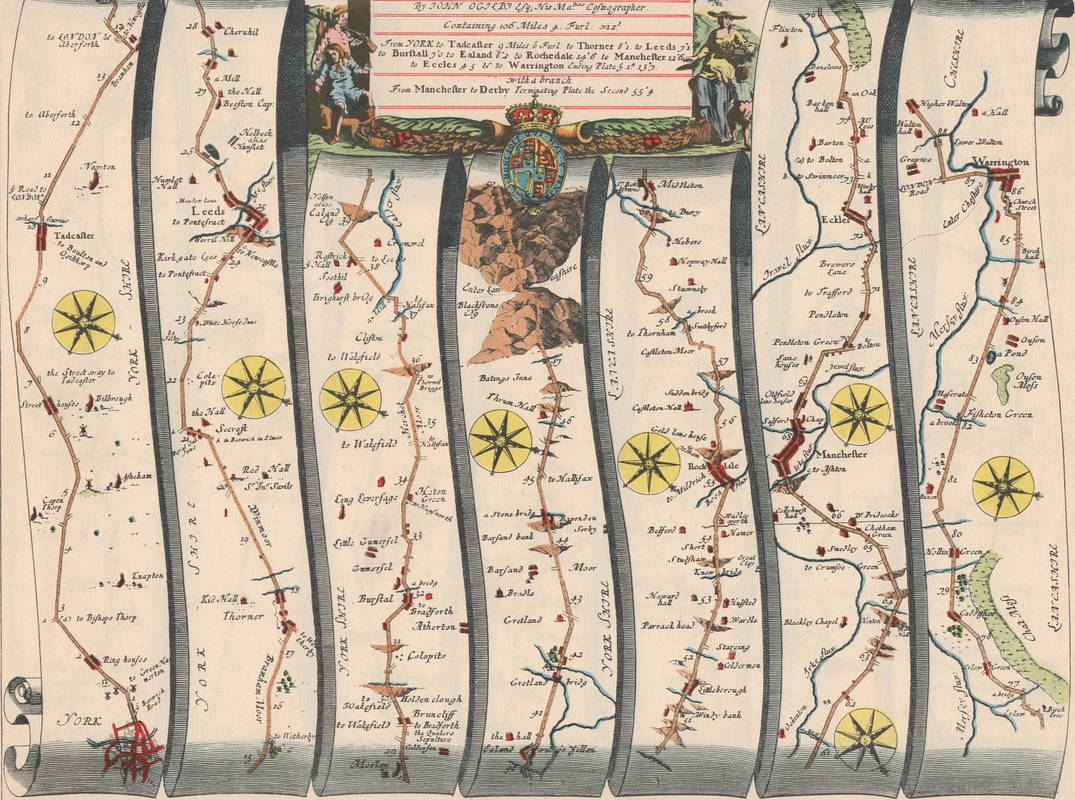 Circa 1700. The road from "Manchester to Derby". "Gilderson" is at the bottom of the third panel from the left. Interesting is that the "Quaker's Sepulture" in Bruntcliffe was added to the map.   From a reproduction that I own. 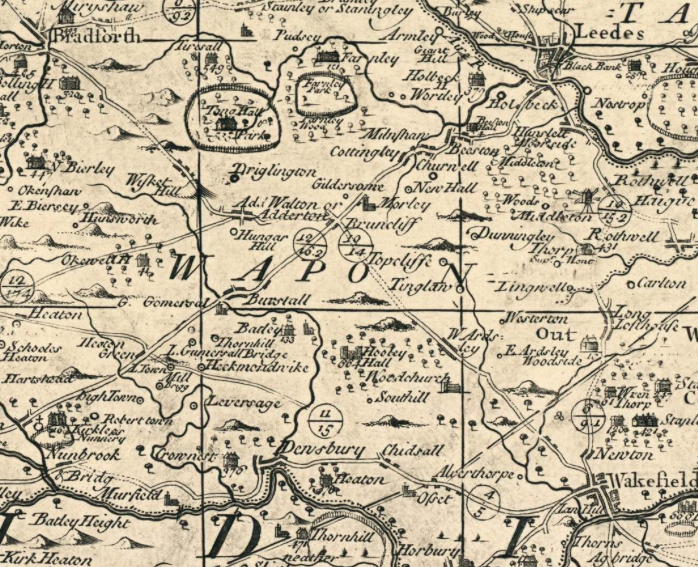 Below is a list of places, most of which can be identified. If you can help with omissions or corrections please get in touch through the contact information at the bottom of the page.         Maps courtesy of WYAS . 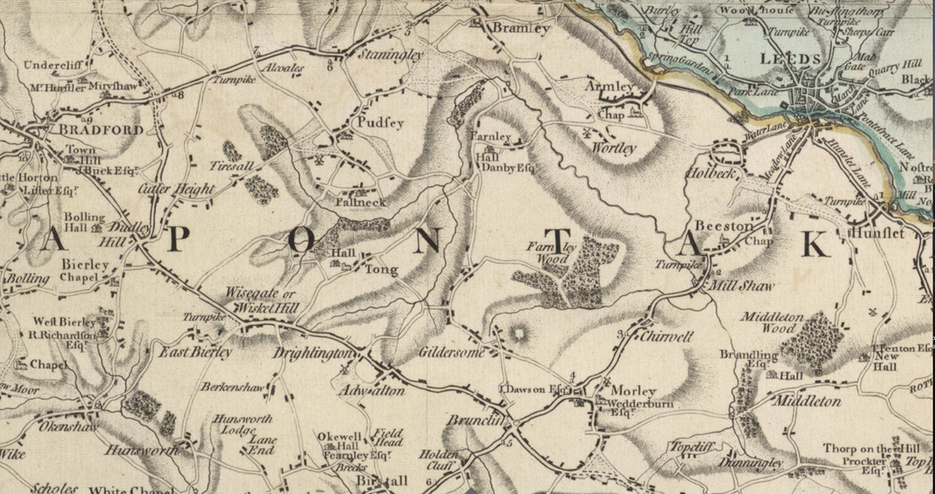 Gildersome 1771   It's interesting to note that Gildersome has two entrances, one from Morley Hole across Dean Beck and the other thru Old Coal Pit Rd via Nepshaw Lane. 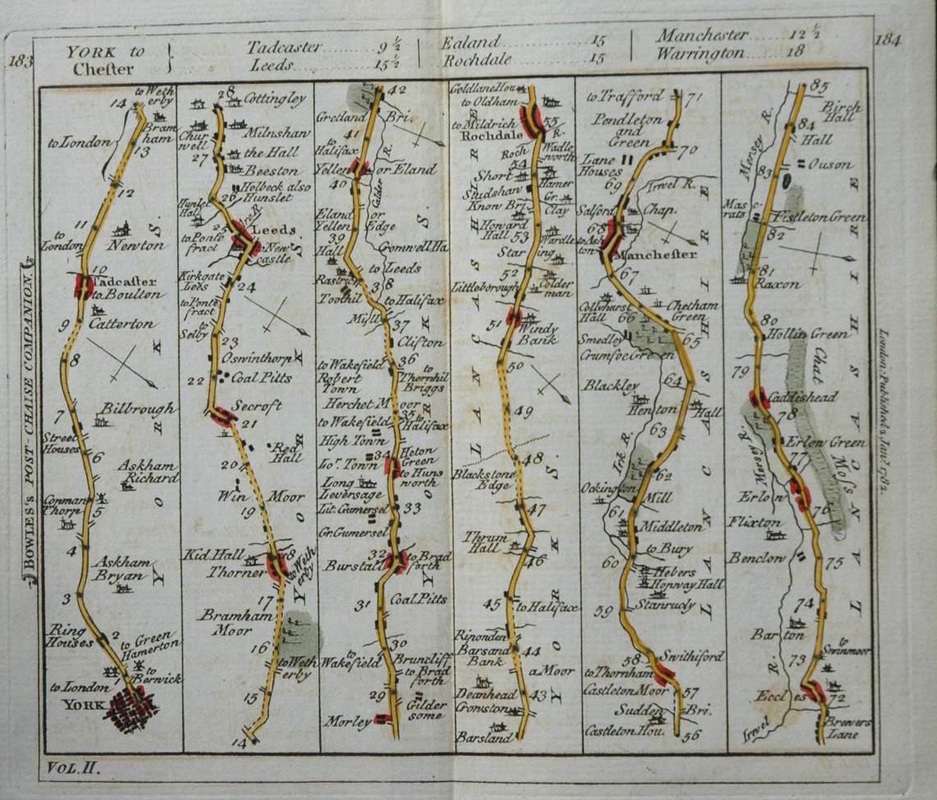 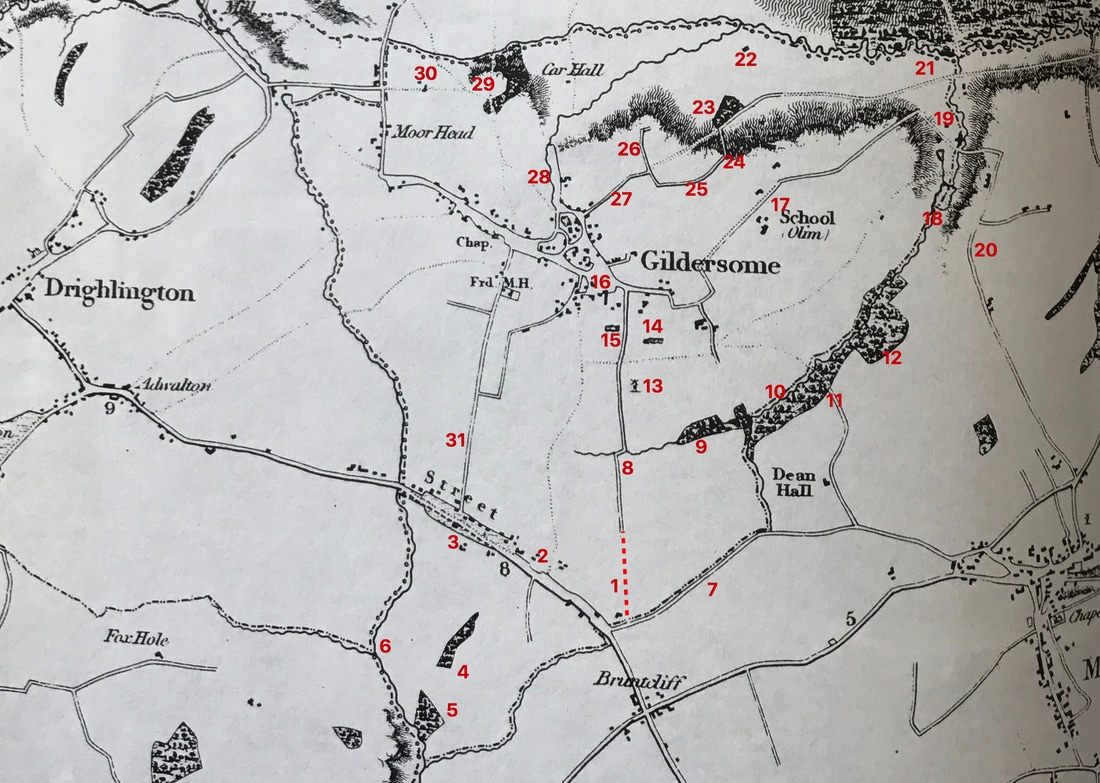 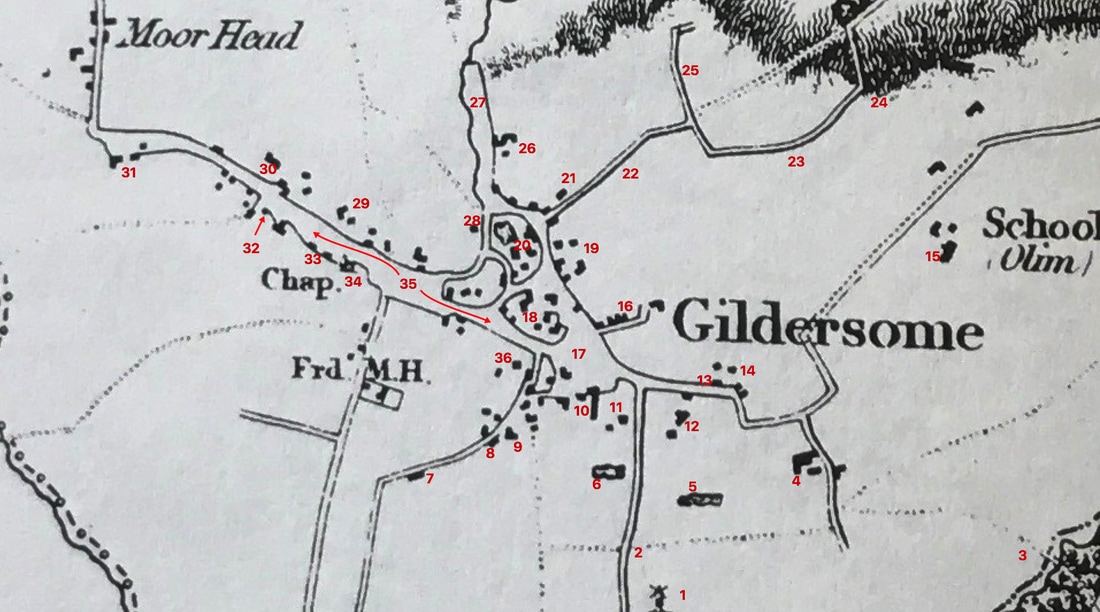 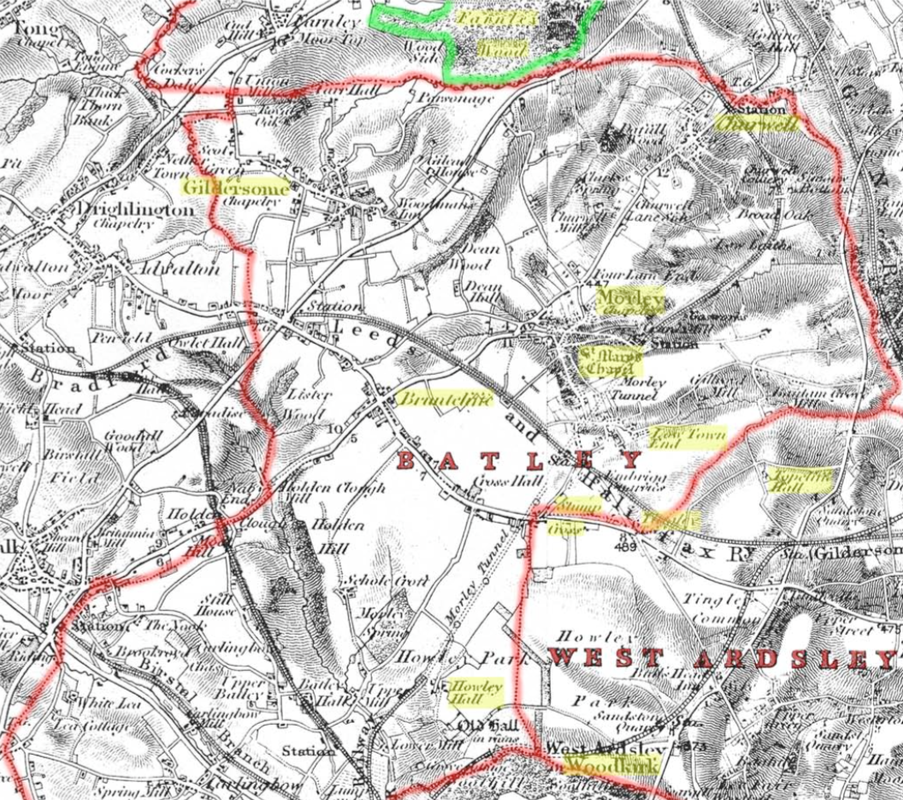 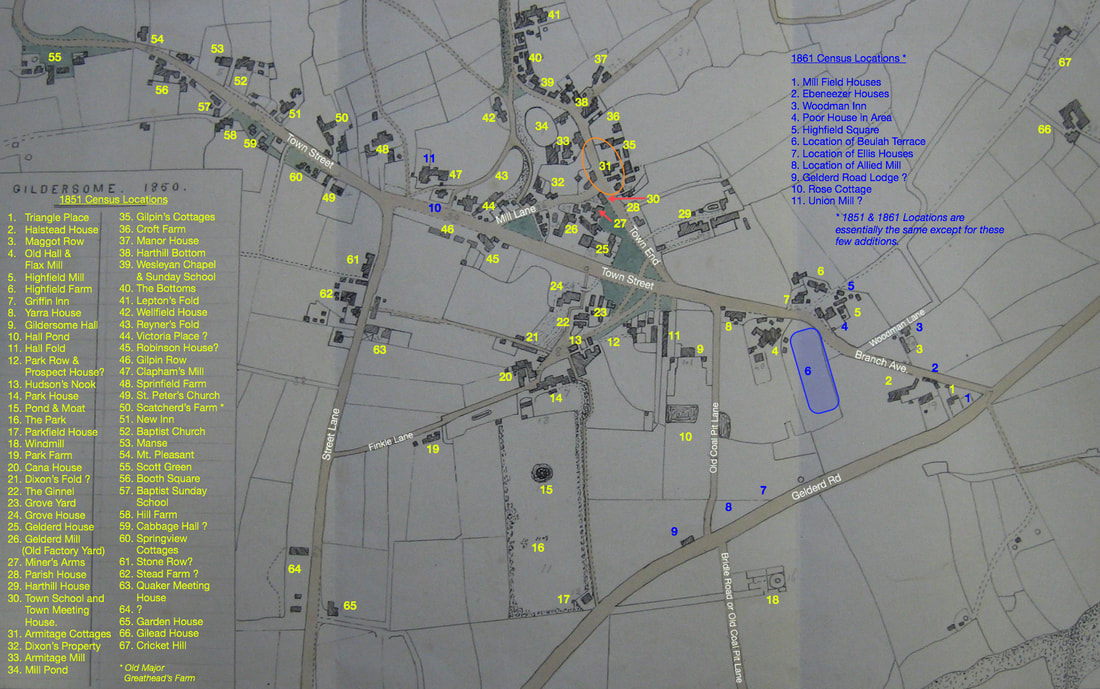 Gildersome circa 1850  This map was made by Alfred Bilbrough (1819 - 1891), who was born in Harthill House and eventually became its owner. Alfred was an accomplished artist and it appears he copied this map from either the Ordnance Survey or the Tithe Map. I added the place names and the numbers, many of which can be found in the 1851 and 1861 Census for Gildersome.      Click to Enlarge
Map courtesy of the "Bilbrough/ Town Collection" WYAS Leeds. 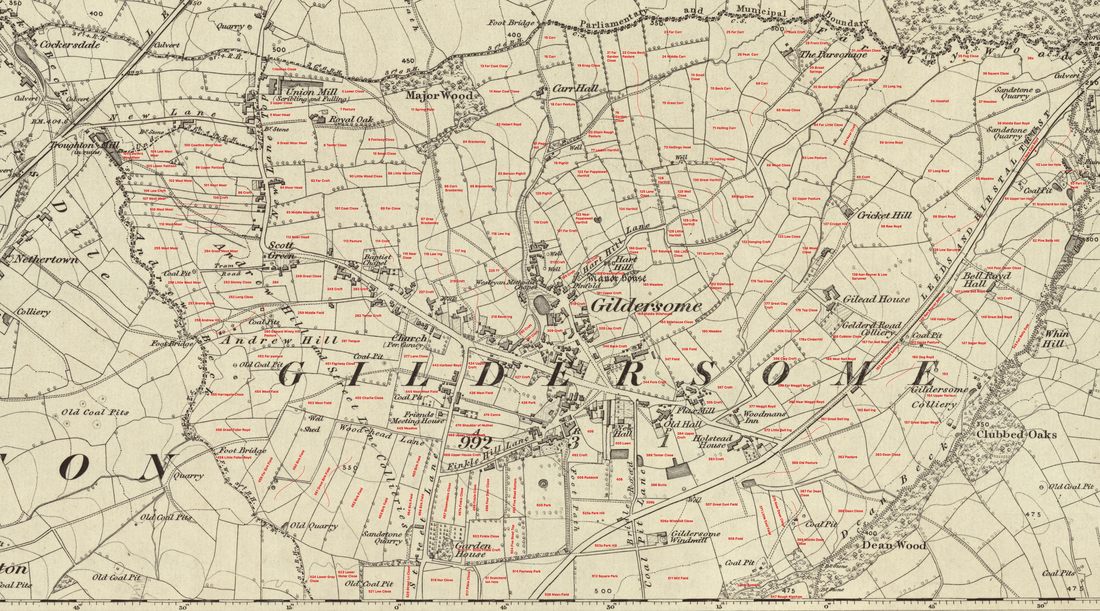 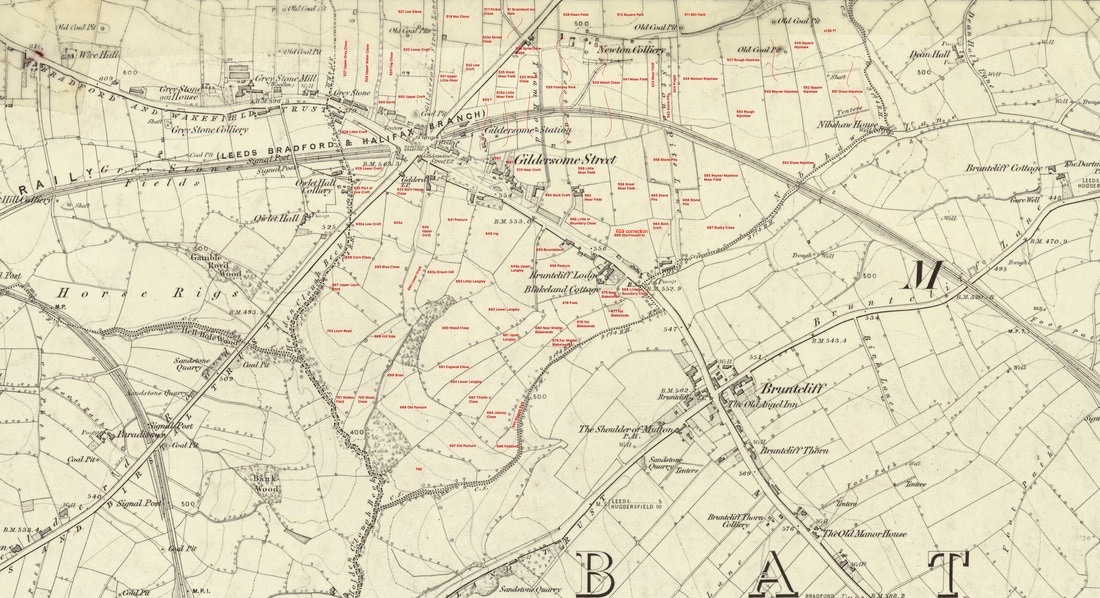 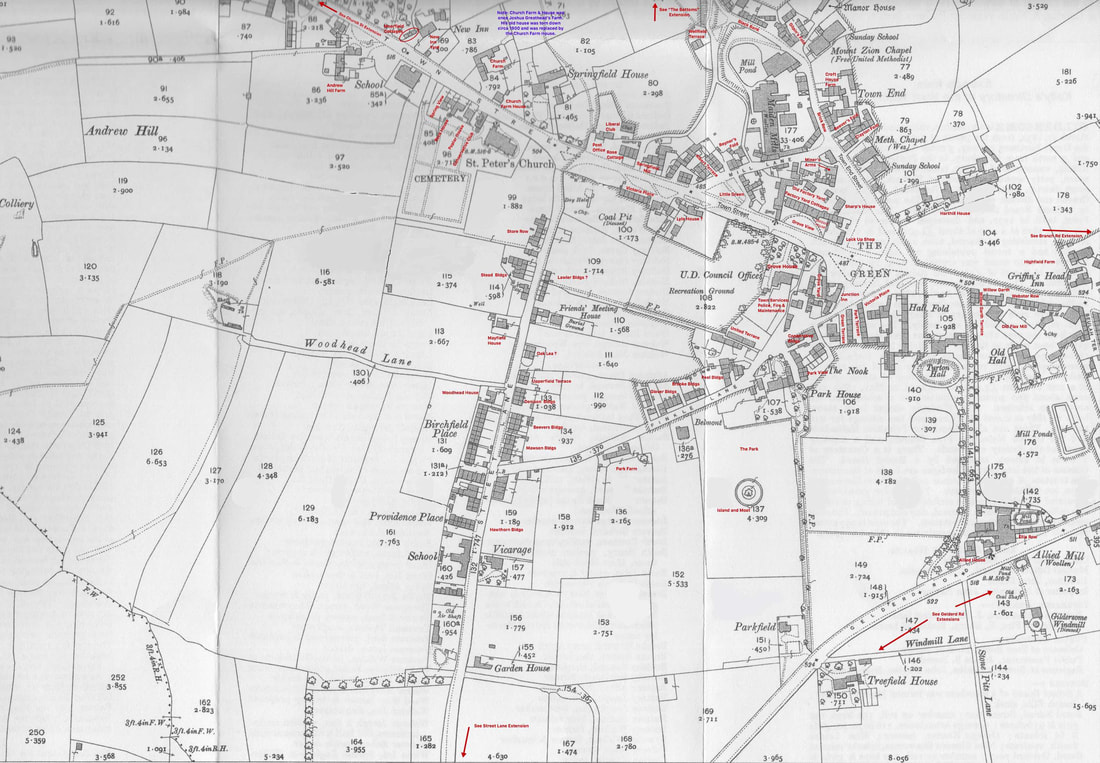 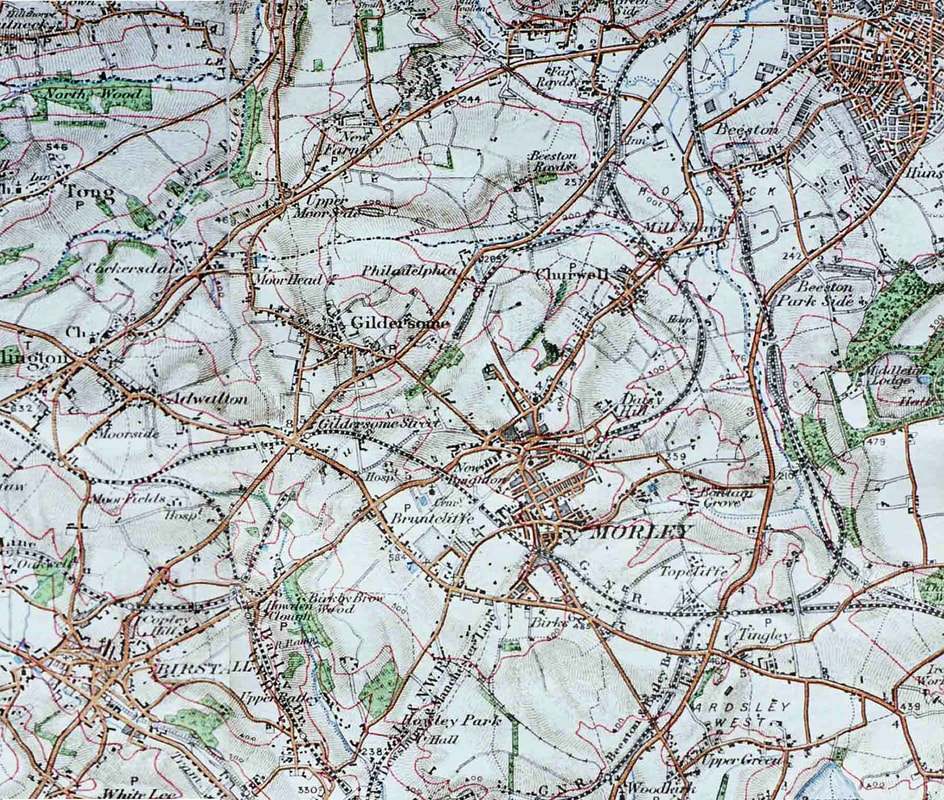 The General Gildersome Area Circa 1913 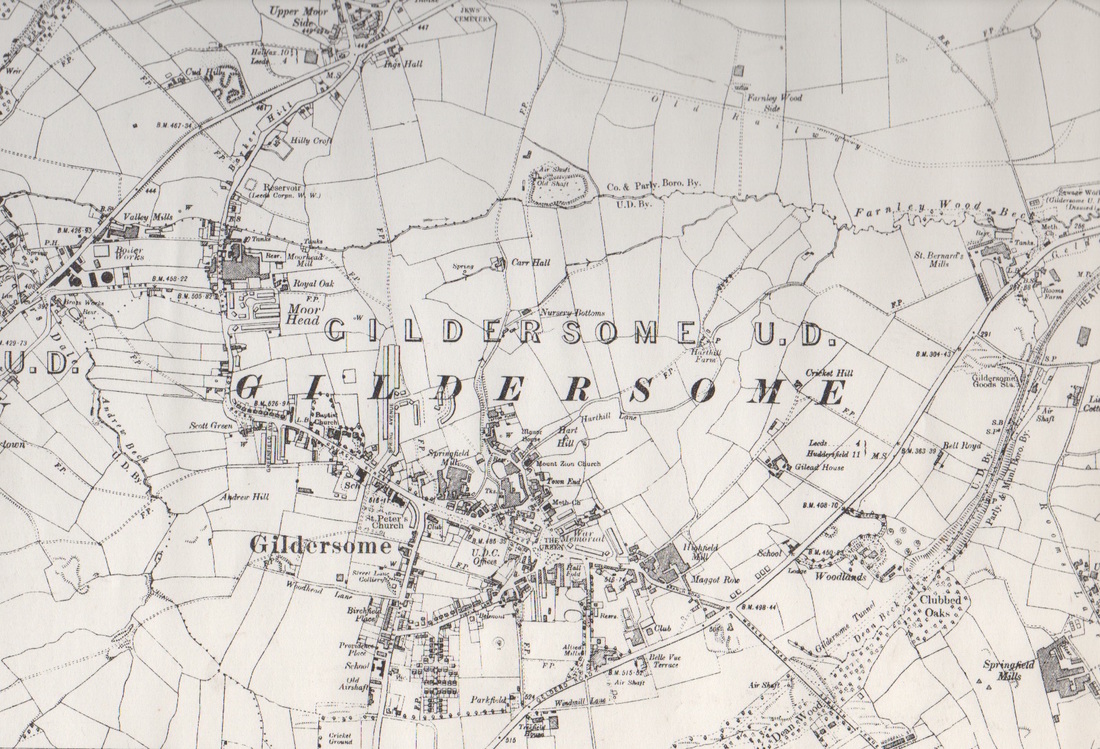