Use pull down menus above to navigate the site.
Industrial Revolution  Under Construction 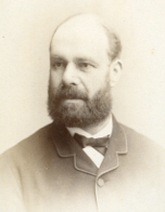 Courtesy of the John Town Collection
In the latter half of the 19th century, William Radford Bilbrough (left) wrote about Gildersome in the late 1700s up to his present. Born in Leeds in 1849, his grandfather was born and died in Harthill House Gildersome and his father grew up there as a lad. William developed a great interest in genealogy and the history of his various families, especially the Bilbroughs of Gildersome. He visited Gildersome often and attended the Baptist Church. William produced a great deal of accurate written material including "The History of the Gildersome Baptist Church" published in 1888 (the only existing copy I know of is in the office safe of the Gildersome Baptist Church). Here is a selection of some of his writings on Gildersome's past:

“At that time Gildersome was an outlying clothing district where spinning and weaving were carried on in the dwelling houses of the people, and where the sound of the machinery could be heard through the open doors or windows by the passerby. Donkeys might be seen wandering about the Green nibbling a bit here and there, till it was their time to work by carrying slung across their backs, bags of wool or panniers full of bobbins of warp and weft, or the woven cloth to the fullers stocks, and afterwards to the merchants. There were then but two places of worship in Gildersome, the Baptist Chapel, and the Quakers Meeting House. Of footpaths and bridle paths there were plenty in all directions, but those who drove a conveyance along the highroad into Gildersome must return the way they came. In those days the township contained 1200 inhabitants.”

“Before the Baptist Chapel was built many of the people regularly attended the Old Chapel at Morley and the Baptists of Gildersome were very good friends with the Presbyterians of Morley & in those days both Baptist & Unitarian Ministers occasionally preached from the pulpit in Morley Old Chapel, then the only place to worship there. The Greatheed family & many Gildersome people  were buried in the graveyard of Morley Old Chapel, and there rests the body of my Great Grandfather James Bilbrough _____Thus Gildersome was an out of the way place in which for more than 50 years the House of God was the Baptist Chapel to which many people went on Sunday to worship__Wlm. Hudson II one of the trustees of the “Chapel and land, minister’s house etc”, carried on his business of merchant in the village & supplied people far & near with wool, oil, woolen cloth, sugar, rum & brandy; in his a/c (accounts) book I find that in 1750 he paid for Beef & Mutton 2d  per lb._________In 1780 my Grandfather John Bilbrough was born in Gildersome then a Village with 1200 inhabitants, The highway from Leeds was through Holbeck, Churwell & Morley, then a branch road led into Gildersome & it used to be said that “there was a way into Gildersome but no way out of it”____What a quiet, clean, healthy breezy place it was, standing upon high ground from which there was a fine view over the surrounding country & especially from the top of the hill in the field behind my Grandfather’s house. There he could stand on his own ground & look over Farnley Wood that stretched along the valley towards Leeds & he enjoyed the thought that there was no finer view within many a mile. Tired with the bustle & noise of a big town I often think I should like to retire & live in the country & if I could only find a place similar to the delightful Village in which my Grandfather was born and died it would answer all of my most romantic ideas of what such a place of retirement should be. In 1824 a new road was made from Leeds to Gildersome & named “Geldered Road”____In 1838 there were 120 hand looms in Gildersome for the people then wove the woolen cloth in their own homes & now in 1878 these are things of the past & the place is full of mill-hands & colliers & ashes & smoke. There is now at Gildersome a Railway & Gas & Water Works, a Local Board & a School Board.”

26 Mar 1872 William Radford Bilbrough Diaries
"Gildersome seems to me more Smokey and ashy each time I go. The lads and lasses gathered round as Ma got out of the cab and also when she started again at night. Their remarks and cool criticisms being freely made for the benefit of all who chose to hear. This is not to be wondered at, for it has been said “Since you left, there has not been a lady to be found living in Gildersome and I would advise you to think of the Village as it used to be, and forget what it is”.

​Thurs. 23 Jan 1879 William Radford Bilbrough Diaries concerning a visit to his uncle Alfred Bilbrough at Harthill House:
“….we strolled out across a field or two to Hart Hill the highest point for a great distance on all sides and from which you can see the horizon the whole way round. We could see the Town Hall at Leeds and much nearer the small white-washed cottage to which Aunt Bilbrough used to go with the young folks and where they used to eat their refreshments which they had taken with them. At that time the Farnley Wood stretched away from this cottage and covered some 350 acres, making a beautiful sight as seen from the spot upon which we now stood. After returning to the house I and Nelson who had grown taller since I saw him last & who came from ‘Ocbrook’ school yesterday walked up the Village to Pa’s old farm. Here I stopped & talked to Bill Buttery the tenant & we looked at the alterations. Part of the old house is pulled down & in the remaining two rooms I saw a number of pigs warm & comfortable as he had a fire in the old fireplace.”
From Pigot's 1834 Directory :
"GILDERSOME, is a chapelry, in the parish of Batley, and the wapentake of Morley ; 2 miles n.w. from Morley, and 4.5 s.w. from Leeds. The manufactures are of the same kind as those which prevail in Morley. The places of worship are the small ancient chapel, subject to Batley, and a chapel each for Wesleyan methodists, baptists, and the society of friends. The chapelry contained, in 1821, 1,592 inhabitants, and in 1831, 1,652."

From the Lewis's Topographical Dictionary of England 1835 :
"GILDERSOME, a chapelry in that part of the parish of BATLEY, which is in the wapentake of MORLEY, West riding of the county of YORK, 4 miles W.S.W. from Leeds, containing 1592 inhabitants. The living is a perpetual curacy, in the archdeaconry and diocese of York, endowed with £ 1000 royal bounty, and £ 1200 parliamentary grant. The chapel has lately received an addition of one hundred and forty-three free sittings, the Incorporated Society for the enlargement of churches and chapels having granted £200 towards defraying the expense. There are places of worship for Baptists and Wesleyan Methodists. Bolton Hargrave, Esq., in 1749, bequeathed £ 10 a year for the education of children. Here is a scribbling-mill and the manufacture of cotton is also carried on."

From the National Gazetteer 1868 :
"GILDERSOME, a chapelry in the parish of Batley, wapentake of Morley, West Riding county York, 5 miles S.W. of Leeds, its post town, and 5 S.E. of Bradford. It is a railway station on the Wakefield and Bradford branch of the Great Northern line. The manufacture of woollen cloth and numerous coal-mines afford employment to most of the people. There are also fulling mills in operation. The land is chiefly meadow and pasture, and the substratum abounds with coal. The living is a perpetual curacy in the diocese of Ripon, value £120, in the patronage of the Vicar of Batley. The church is an ancient stone structure. The charities produce about £12 per annum. There are places of worship belonging to the Baptists, Wesleyans, and Society of Friends, and a free school, partly endowed. The Earl of Cardigan is lord of the manor."
From the Imperial Gazetteer of England and Wales 1872:
"GILDERSOME, a village and a township-chapelry in Batley parish, W. R. Yorkshire. The village stands adjacent to a branch of the Leeds, Bradford, and Halifax railway, 5 miles SW of Leeds; and has a station on the railway, and a post office under Leeds. The chapelry comprises 1, 120 acres. Real property, £9, 103; of which £3, 450 are in mines. Pop. in 1851, 2, 126; in 1861, 2, 701. Houses, 558. The property is subdivided. Many of the inhabitants are employed in cloth-making and in fulling-mills. The living is a vicarage in the diocese of Ripon. Value, £120.* Patron, the Vicar of Batley. The church is ancient, but good; and has a tower. There are chapels for Baptists, Quakers, and Wesleyans, and an endowed school."