Andrew Hill Farm and Vicinity                              © Charles Soderlund    Feb, 2021
A short while ago I was contacted by Charles Michael North who had lived in Gildersome during the war and post war years in what was then a new semi-detached house, the first on Ashwood Drive. His house sat adjacent to Andrew Hill Farm, and as any budding artist would do, he made the farm an object of study. We're grateful that he did, for he submitted some of his art, photographs and memories for publication on this site. 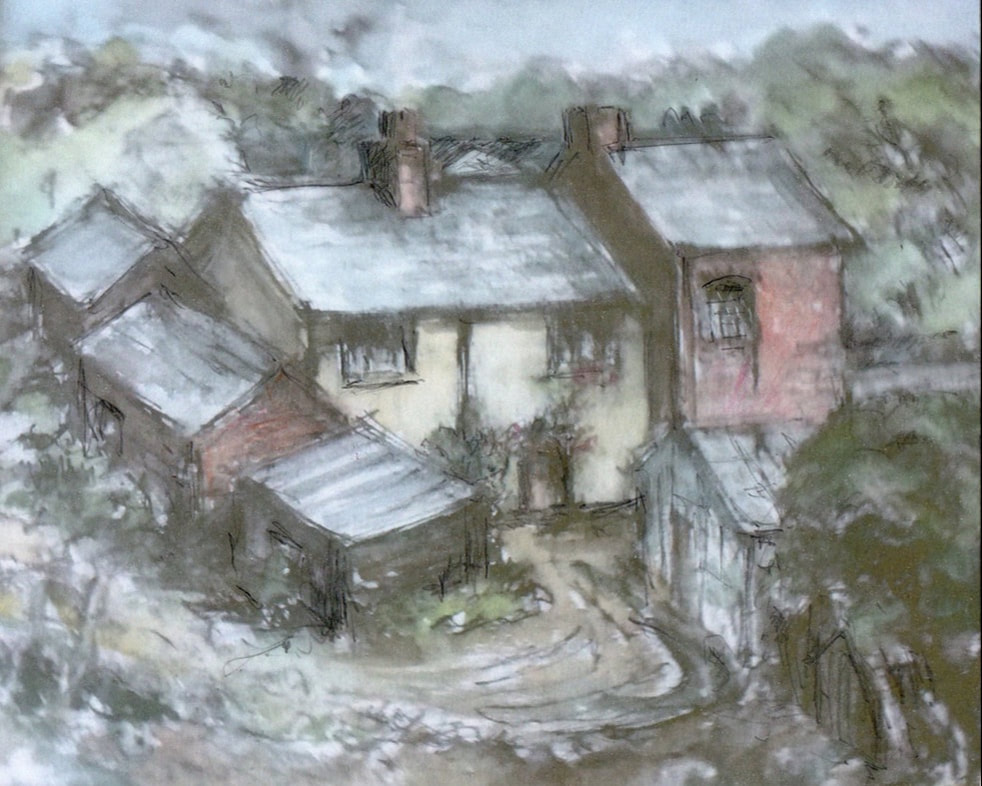 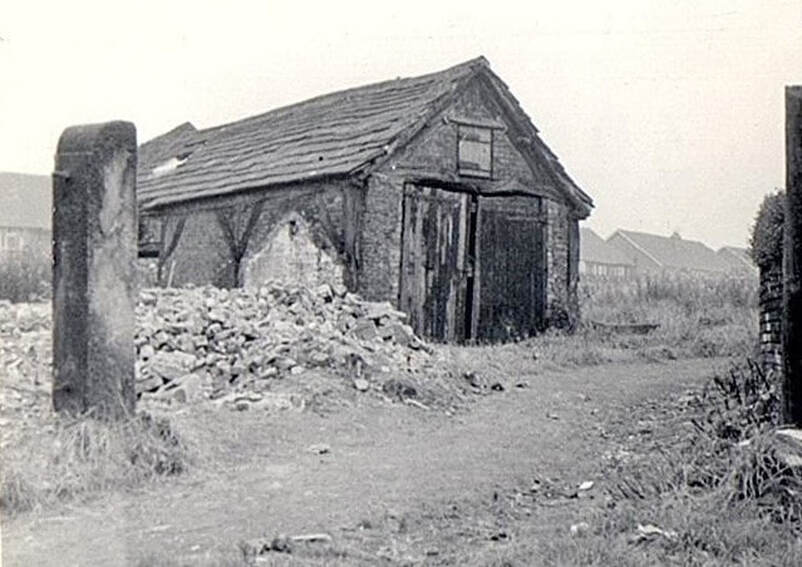 No. 7. "The photo of the barn was taken in 1958 just prior to its demolition, and the first of the Reedsdale Gardens bungalows can just be made out. This barn was part of what we knew as Booth’s Farm, being owned by two Booths brothers, not to be confused with Booth Brothers Mill down Gasworks Lane (more correctly New Lane I believe)." 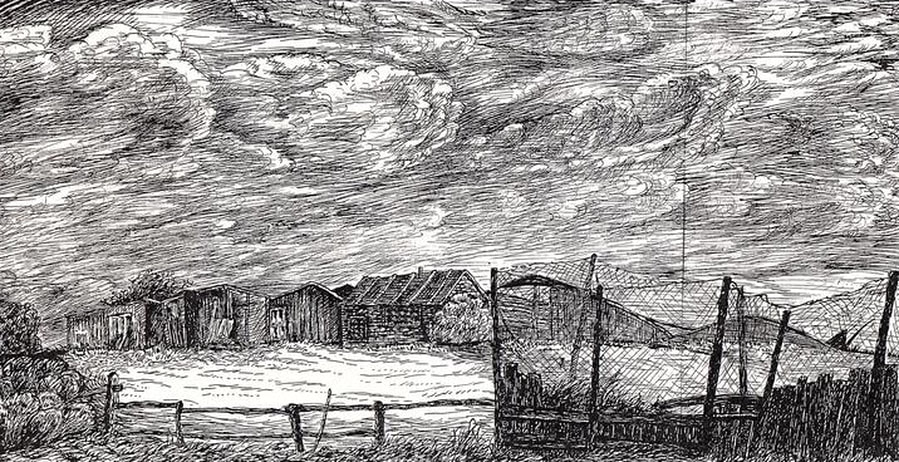 No. 8."The pen and ink sketch I did in 1952 from the living room window of the house where I grew up (12 Church Street), looking across Ashwood Drive to the rhubarb sheds and farm building bordering the school/church field, now having been replaced by the Reedsdale Gardens bungalows." 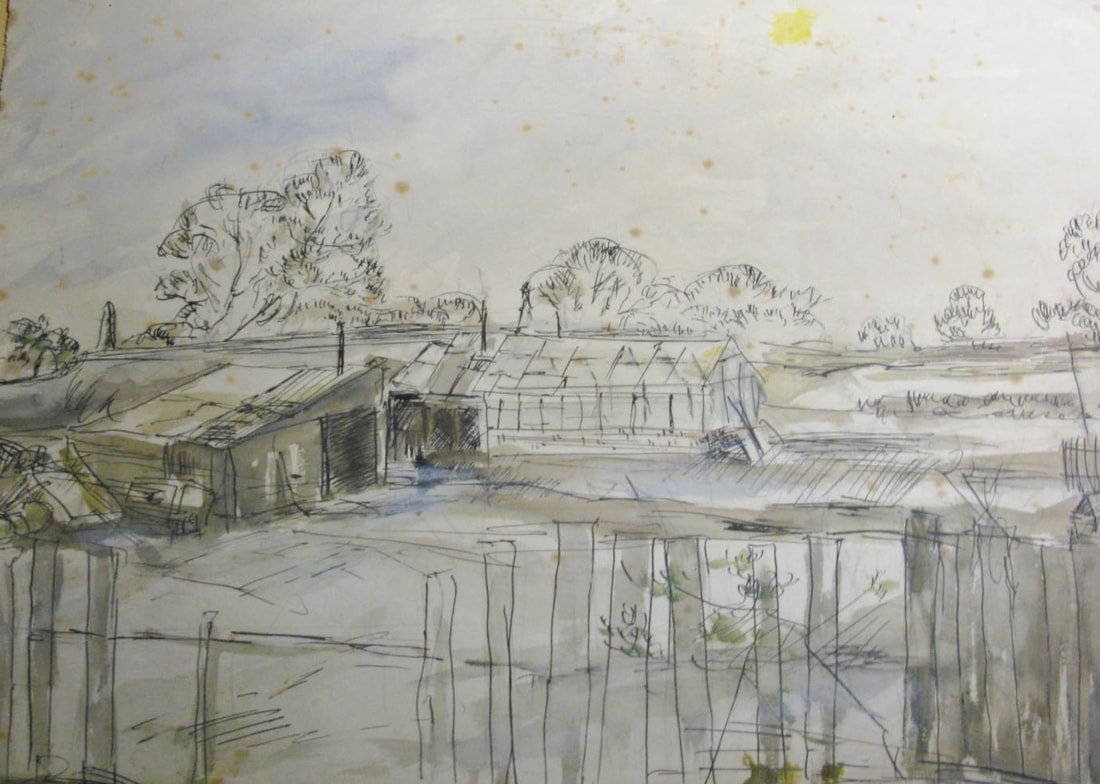 No. 9."Rhubarb was grown in the field behind our house, and I once helped Mr Hemingway to pull, top and tail, and box it in wooden crates for transport by rail to London, probably destined for jam making."

Below: ​"Attached are a number of photos taken in about 1964, and are copies from coloured slides which explains their poor quality. Despite the poor quality they may be better than nothing!"
"The first is Moorfield House and  cottage to its side. Moorfield House can just be seen in the Baptist Chapel photo. I played hide and seek in this house and recall a stained glass window at the top of the main staircase with a picture of Henry Booth, a name to conjure with as my father worked at Booths in Mr Alfred’s day. Mr Westmorland  lived in the cottage (there may have been more than one), and besides being a cobbler, he also did work for Mr Bates, the owner of the house, and one of his duties was feeding the pigs. There were two pig sties to the back of the property, though only one was in use during the war."
"The two photos of Church Corner were taken from the same position, the first of Bill Morris’s House, the name of which escapes me though we were always invited on when carol singing with the church choir on Christmas Day. It was outside the entrance to this house that there was a police box, or Tardis as they are now known! The other Church Corner photo of the Troydale Offices also brings back memories of endless hours queuing for busses."
"The New Inn photo (right) was taken much more recently, but includes the cherry tree planted by Ernest Bates to celebrate the Coronation  in 1953. I believe it has since been removed."

A Bit of History
by the editor
The lane which ran through Andrew Hill Farm's fields was an ancient road to Drighlington, and still exists as a footpath today. Once upon a time it connected with Harthill Lane, and from there one could ride or walk to to Churwell and Leeds. In the 13th or 14th centuries, the road supported shallow pit iron mining near the banks of Andrew Beck and later shallow pit coal mining, higher up the hill. The remains of those pits can still be found if one were to take the footpath down that way. The farm's fields were first enclosed around the mid 1500s when Sir John Savile, then Lord of the Manor of Gildersome, was disposing of most of his common land there. I have good reason to believe that, in the late 16th century, either the Crowther family or their descendants, the Greathead family, acquired the property in order to increase the size of their coal mining interests in the area.  Its not known when the farm buildings were first built or how many rebuilds, alterations or additions have been made to them over the years, but if I were to guess, I'd say it was the early to mid 17th century when Gildersome was expanding to the west along Town St. By the early 1700's the farm came into the possession of the Scatcherds of Morley through a marriage between Miss Mary Greathead and Samuel Scatcherd. The Scatcherds held on to the farm until around 1840. Since the croft adjacent to Church Street (see map 2, below) became known as the "Tenter Croft," ​I presume that its tenants were clothiers or cloth makers. One in particular, from about 1805 to 1845, was a partnership called Lockwood and Peat. The mid 19th century brought an end to most shallow pit mining and cottage industry textiles, it was then that the farm became the property of Matthew and Thomas Stephenson, brothers and cloth merchants. They let the farm buildings to colliery and mill workers and leased out the mineral rights to budding entrepreneurs. During their occupation of Gildersome, from the 1840s to the 1870s, the brothers accumulated over 30% of Gildersome township's total acreage (1100), which included houses, cottages, mills, collieries, mineral rich properties and agricultural land. Circa 1890, the brothers' executors either sold or bequeathed Andrew Hill Farm to their nephews, Matthew Alfred Brigg and Thomas Stephenson Brigg, mill owners, of Leeds. Their names appear as owners of the farm in a 1910 and 1929 tax document. The Hemingways appear as occupiers of the farm in the same 1929 document. Andrew Hill Farm was demolished in the mid to late '50s.

Above, from the National Probate Calendar (Index of Wills and Administrations), we find that Matthew Alfred Brigg
​was named an executor of his uncle's will.

Map 1, 1800 Enclosure Map of Gildersome: The three fields comprising the main properties of Andrew Hill Farm are marked with red dots in this map and the two others maps below. In a 1738 deed in which Samuel Scatcherd the elder, of Morley, was the owner, the three marked fields from left to right were called the Hillside or Brow, the Moor Field and the Overhouse Croft.

Map 2, 1858 O.S. Map: Here again we have the same property. One hundred twenty years after the deed, mentioned above,
the field names have changed, which is not uncommon at all. Note the old and new coal workings and proliferation of
​mining structures within the farm's boundaries.

Map 3, 1922 Stephenson Estate Sale Map: At the time of this sale, Andrew Hill Farm (red dots), belonged to Thomas and Matthew Brigg. The coloured fields, green, yellow and orange, belong to the M&T Stephenson's sale, to which the green properties
(Lot 11) are part of Grey Stone Farm, which extended further south to the Wakefield and Bradford Road.