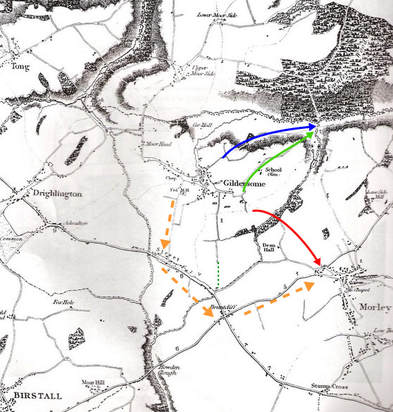 Click on Map to Expand ¹
Before 1826, if one wanted to walk or ride a horse from Gildersome to Leeds, a person had three good options (see map left):  These footpaths were very similar to today's unpaved extension of Harthill Lane. Protected by ancient right of way laws, they were inspected by local officials and maintained by local taxes, just like today. However, there was only one profitable way to move manufactured goods and mineral wealth from Gildersome to the markets in Leeds and that was by way of the turnpike system. The turnpikes provided the heavy wagons of the day with a hard and level surface relatively free from mud and potholes and with gradual changes in elevation. Before Gelderd Road, the shortest way from the center of Gildersome to Leeds was first to get on Street Lane which was part of the turnpike system, then to take "The Street" (Wakefield & Bradford Rd) to Bruntcliffe and from there to turn left to Morley Hole (the Leeds & Elland Road). For those in Gildersome, the route to Morley Hole and then on to Leeds, added a mile or more to the trip, which meant extra fees charged by carters and the additional cost of tolls at The Street and Bruntcliffe Bars. (see orange arrows on map)
It wasn't the inconvenience of Gildersome merchants that spurred on the development of a new road, but rather the need for a straighter and more level "Turnpike" from Leeds to Birstall. This had been the subject of discussion for some time. Complaints about the two hills at Churwell and the steep grades at Howden Clough piled up until it was decided that something had to be done.  Sometime circa 1813 or 14, the Leeds to Birstall Turnpike Trust was created to study and eventually implement the creation of such a road and on the 19th of September, 1814 the following appeared in the Leeds Mercury²: "NOTICE is hereby given, That Application is intended to be made to Parliament in the next Session for leave to bring a Bill, with all proper and usual Powers therein for making a Turnpike Road, from or near the Town of Gildersome, in the Parish of Batley, in the West Riding of the County of York, to communicate with the Turnpike Road leading from Leeds to Elland, in the said Riding, at or near to a certain Public Bridge, commonly called or known by the Name of Miles Bridge, in the Township of Churwell, within the Parish of Batley aforesaid; and which said intended Road is proposed to pass over and through Lands within the Townships of Gildersome, Morley and Churwell, all within the said Parish of Batley, ----By Order, JOHN CARR
Wakefield, 3rd September, 1814"

The above was part of grand plan called the Leeds to Halifax Turnpike, consisting of two sections, the Birstall to Halifax Turnpike and the Leeds to Birstall Turnpike. The "Leeds" portion would terminate at The Street and would later be called Gelderd Road and the Halifax portion would begin south of The Street. In the same month as the "Notice", above, a survey was submitted by John Crooks and subsequently delivered to John Carr, entitled: "A Book of Reference to a Plan of an Intended Road from Gildersome to Miles Bridge." ³ The plan detailed a new road starting at the Griffin Inn, which ran a similar course to a then existing "footway" past Gilead house to the west and on to Roomsbridge (see number 2 option above).  Its intended point of termination was the Wakefield & Bradford Road via Street Lane. It's certain that, at the time, several options were being explored but it was still early days. In June of 1815, a "Meeting of the Proprietors of Estates"⁴ chaired by Watson Scatcherd  was called to exhibit the proposed routes and discuss the project, its impacts upon the economy and any possible land appropriations. The project was received favorably and it was resolved that further study was needed as well as regular meetings attended by those concerned.

​Time passed and the wheels of Parliament ground slowly. Finally, in May of 1823, approval was granted: "The public will be glad to learn, that the royal assent to the act of Parliament for the long intended new road from Leeds to Birstal, by way of Gildersome, is obtained, and also that the same will be carried into execution this year. ______This road, when completed, will be of great importance to the country it passes through, and to the town of Leeds, particularly the western parts, as it will open into a very valuable coal district, and may be considered one of the best hues (sic) in this part of the country".⁵ 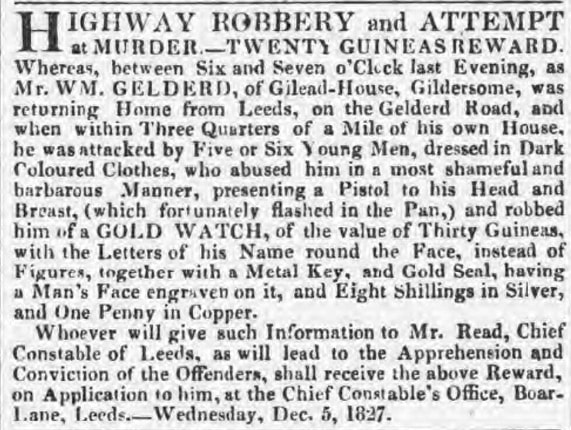