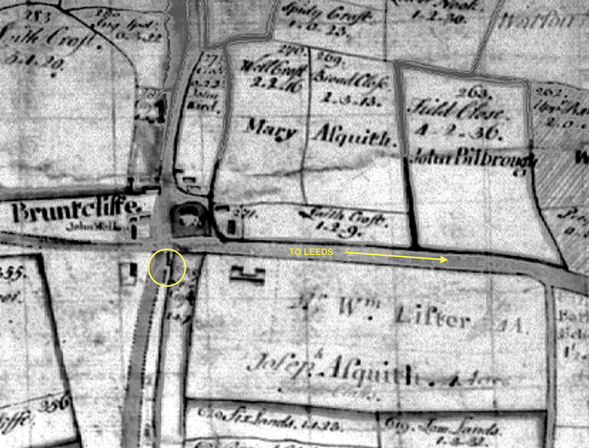 Bruntcliffe Thorn circa 1780s
For now, the story of the Bilbrough family begins here at the the tiny hamlet of Bruntcliffe Thorn, the home of James Bilbrough and his wife Mary Buckley, in the eighteenth century. Bruntcliffe is located 5 miles from Leeds, West Yorkshire and today is an industrial area on the city's fringe. Back then, it was a bucolic settlement at the intersection of two of the region's highroads. James and Mary built their home there in the 1730s, yellow circle, left. They and their descendants are the subject of this history. 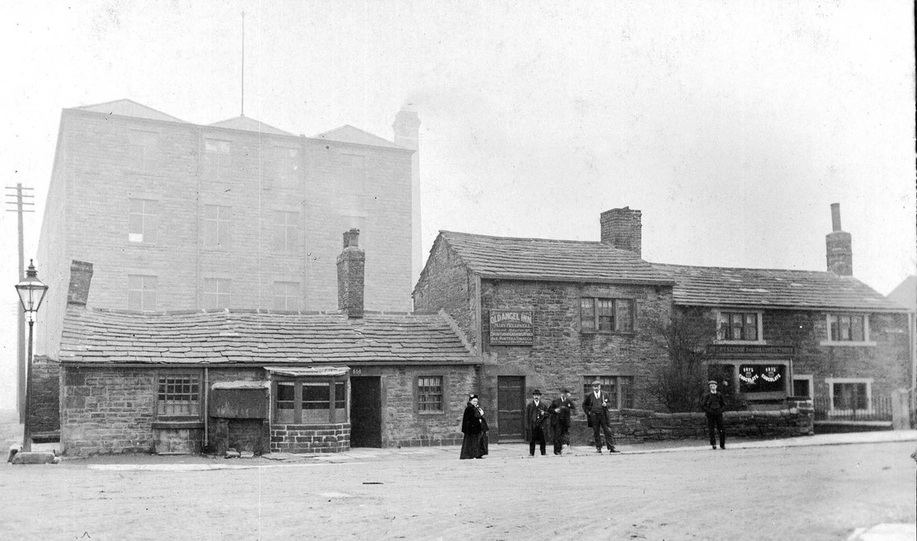 Above: Bilbrough’s Corner at the intersection of the Wakefield/Bradford Road (the Street) and the Birstall Valley/Leeds Road. To the left can be seen the “Old” Angel Inn, which according to family accounts was built by John Bilbrough b1745 aroung 1787, John's granddaughter, Mary Helliwell b1822, is standing in the center of the photo. The center portion was filled in by Mary's father, Thomas Helliwell, and to the right is the “Old Two Story Stone Cottage” built by James Bilbrough b1713 around 1740. At the time of the photo the cottage was called Rose Cottage and was occupied by Henry Seddon, Confectioner, and his wife Alice, nee. Darnbrough, her mother was Elizabeth Ann Bilbrough. In the 1700s and early 1800s, Rose Cottage was the site of a prosperous spinning and weaving business and, later became a grocery and baking shop. Bilbroughs occupied Rose Cottage for over 160 years. During the 19th century, Bilbroughs owned and farmed at least 20 acres behind the Inn and operated a thriving malting business. In the background is Bruntcliffe Mill, situated on the site of the Malt kilns.
Picture courtesy of the David Atkinson Collection (Morley Archives) 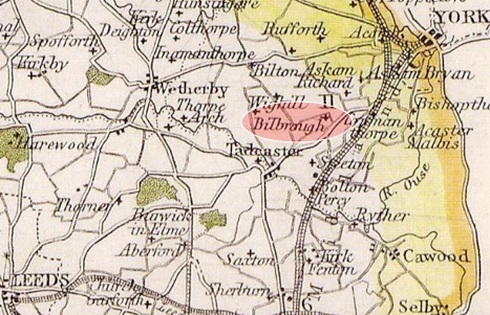 Searching for the Family's Origin

“These reminiscences I have written as a result of quiet hours spent in collecting and putting in order vestiges of my Ancestors. No other thing I possess carries me so far into the past as my surname.(The Village of) Bilbrough is situated upon the highest table-land in the Ainsty of York. The York Ainsty consists of the land lying between York and Tadcaster, its boundaries being the Rivers Ouse, Wharf and Nidd. Bilbrough stands not merely on the edge of high ground, for while Healaugh two miles to the N.W. is only 80 feet, Bilbrough Hill rises to 145 feet above sea level. There is a local saying addressed to those who require a bracing air, “you must go up to the moor to get some Bilbrough bloom upon your cheeks”.

Bill or Bil signifies a hill jutting out from high ground which can be seen from a long way off, and which to those in the plain below shows against the sky, as the highest point. Such places are just those that were first chosen for security. A fenced camp had been there from very early times. The Romans took possession of the site and made it one of their military stations. (Later) It was known as Bilburgh, the Hill Stronghold*. In later times it was used for a Beacon, and in the parish registers is an entry of a “daughter of a soldier at the Beacon” This old signal place, according to Andrew Marvell, was at one time a landmark for ships coming up the Humber.

Surnames were first used in England under King Edward the Confessor and many old surnames were taken from places. Thus centuries ago, “Sons of the Soil” became known as “de Bilburgh” signifying that they lived at Bilburgh, and now spelt Bilbrough, a place six miles from York, mentioned in the Doomsday Book (1081 to 1087). Their descendants have retained the name to this day. What a fine breezy upland spot our ancestors occupied, and we have inherited a good name which for the last 600 years occurs from time to time in the old Wills in the York Registry, and and in other Deeds and Documents preserved elsewhere. A surname, as the term signifies, is the family name and was written above the Christian or given name which belongs to the individual only. If my Grandfather had lived 500 years ago, he would have signed his name:
de Bilburgh John”

One of the earliest recorded instances of the surname Bilbrough comes from 1305 when a Richard de Bilburgh is found among a jury of twelve in the town of York. Another early entry in the York Registry of Wills in the year 1341 is the Will of Elenae de Bilburgh, in it can be found the name of her father, Thomas de Bilburgh and three sisters, Isabella, Julia and Margery. The Will is in Latin, here is an English translation:

Over the years, the Bilbrough surname appears here and there in parish registers, legal documents, tax records and other forms but without enough frequency to give today’s different Bilbrough families a definite link back to those early “de Bilburghs”. In fact, most Bilbrough families can only trace their past back to the 17th century, if that. Such is the case with our Bilbrough of Bruntcliffe family. Our 19th century genealogists, above, assumed that the family was originally from the village of Bilbrough, whence most Bilbrough families in Yorkshire originate. This was a natural assumption since the village of Bilbrough was only about 15 to 20 miles away. But the surname Bilbrough and its numerous spelling variations could also derive from the County of Nottingham and its town of Bilborough or to a village called Bilsborough in the County of Lancashire. Both these town names are derived from the same ancient word source as their Yorkshire counterpart.

Researching old documents is further hampered by the sometimes wild variations to the spelling of the name Bilbrough. In past times, a recorder, be he clerk or priest, was one of the few people in the region capable of reading and writing. Yorkshire was and still is a land with a wide range of dialectical differences so, It was up to the recorder to spell the name as it sounded or as he thought it sounded. At other times, records were simply inaccurately copied from one document to another. During my research I have seen it spelled Billbrough, Billsborough, Billberry, Bilsbery, Bilbro, Bilbie, Bilburgh, Billburg and Bilborow, just to name a few. For example: the parish birth record for Lydia Bilsbrough (born 1681) records her surname as Bilber, her marriage record names her as Bilsberry; yet her father’s name is spelled Bilborough in another parish record. James Bilbrough b1713, himself, in a Batley parish marriage record, is recorded as Bilberry and his bride as Mary Buckle. Our family didn’t consistently show up in records as ‘Bilbrough’, until the beginning of the 19th century.

Yet, the most significant problem when researching parish records in Yorkshire are gaps, missing pages and missing books. Many of the records only go back to the 16th and 17th centuries, if that. Books and pages were lost through fire, theft, or just plain carelessness and during Cromwell’s time, scores were deliberately destroyed. Not to mention the hundreds of reasons why a person might not make it into parish records in the first place.
​
I believe I've have had some success in pushing back the earliest ancestor to the mid 1600s. You can read about that on the James b1713 Page.
Where do I go from here?

How do you know if you belong to this family? The village of Bilbrough, 10 miles southwest of York, is the origin of the name and those with their surname spelled “Bilbrough” share a connection to that village in the past. Rare as the name is, there are many branches with no apparent links to any common ancestor. Like our Bruntcliffe/Gildersome Bilbroughs, there are also Bilbrough families from Tadcaster, Pontefract, and Campsall in Yorkshire, just to name a few. So, how do you know if you belong to this Bilbrough family? That’s just what I hope this web site will answer. By the time you get down to the third or fourth generations, you may be able to find the name of a great grandparent or grandparent you recognize, depending on your age. Since we are following the Bilbrough surname, the male line is traced with greater detail. The third generation of Bilbroughs is the most important in terms of our Bilbrough surname. All of our living Bilbrough family members are descended from William and James of the third generation. Of those Bilbroughs, the vast majority are descended from William, and most of them are to be found in the USA and Maryland in particular. There are also plenty of Bilbrough descendants from the female side, though most married and their surname changed to that of their husbands, they can prove difficult to trace, especially if their marriage details are unknown. Where possible, female Bilbrough lineage will be presented.

James and Mary are the earliest ancestors for whom we have verified documentation so we'll start there and call them “Generation 1”. Likewise, their children would be “Generation 2”, their grandchildren, “Generation 3” and so forth, hopefully ad infinitum.

A quick test to determine a connection to this Bilbrough family is as follows:
1. Is your Bilbrough family is from Maryland, Philadelphia, New Jersey or Delaware? Maybe!
​2. Does your family use Priestley or Brooks as a recurring middle name? Definitely! 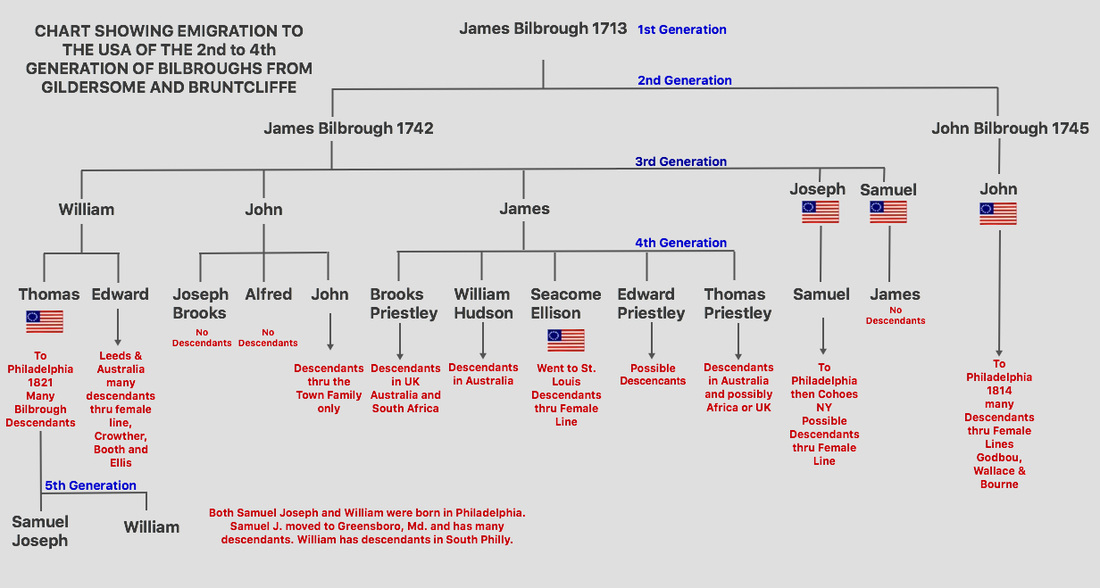