Use pull down menus ​above to navigate the site.
** NOTE** To see other areas of Gildersome, use the thumbnails below to open the pages. 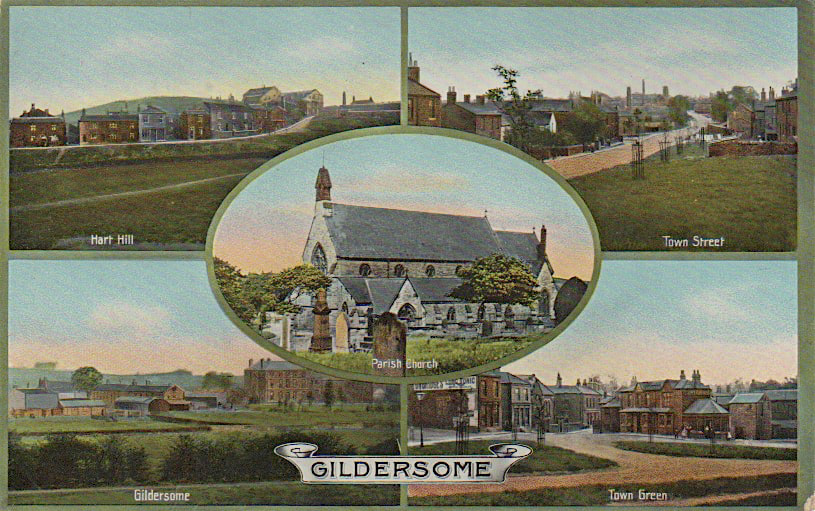 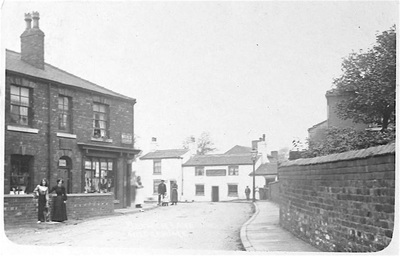 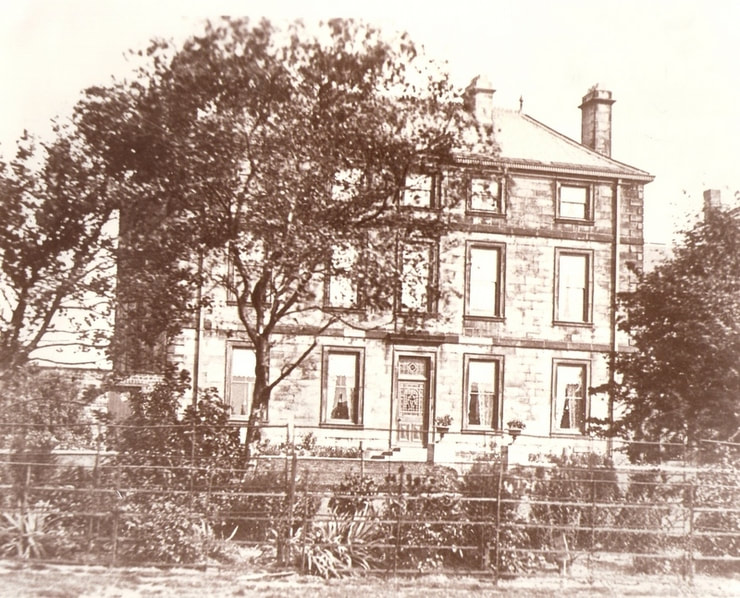 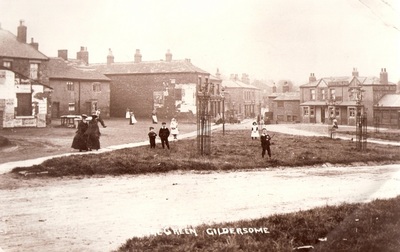 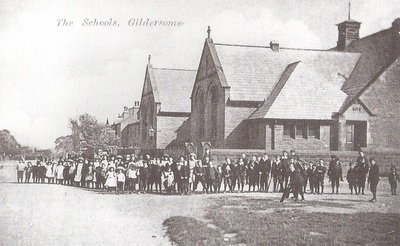 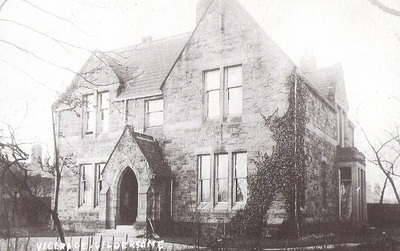 Street Lane and The Street 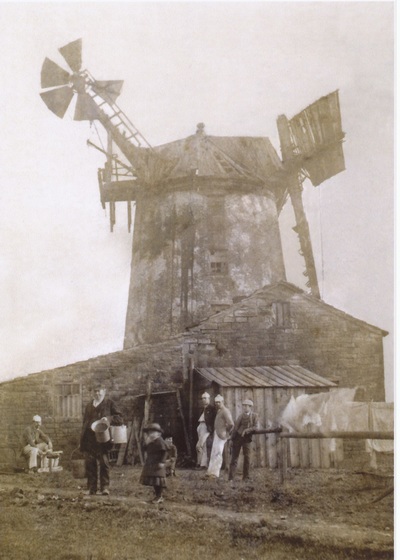 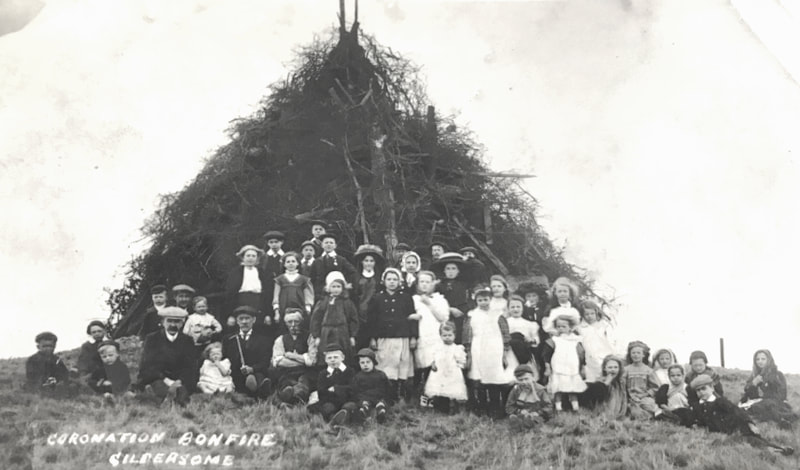 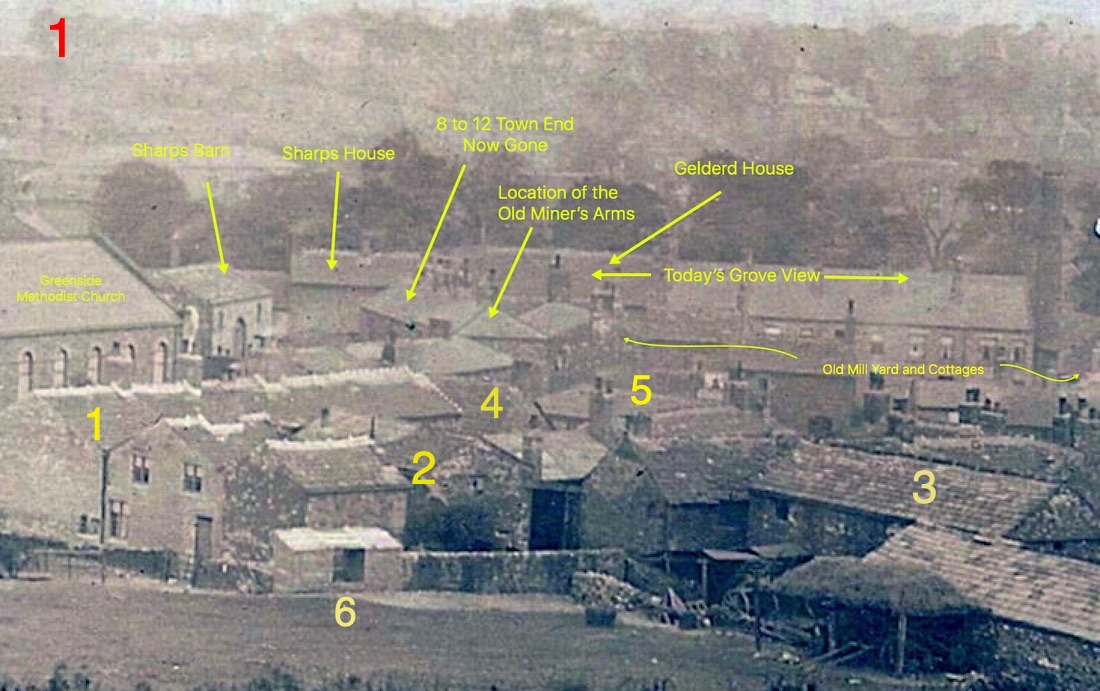 1910: Along Town End, from a shot taken on Harthill. The dark line of trees stand before Grove House along Town Street and the jumble of buildings in the foreground are on the photographer's side of Town End, consisting of 1. Clayton Fold, 2. Beevers Fold and 3. part of Croft Farm. Number 4, was the location of Gildersome's Workhouse (see  photo No. 2 below). Number 5, the flat roof behind the chimney, was the "New" School on the Green built in 1810. Number 6 were communal toilets. The "Old Factory Yard" was once the site of Gelderd's Mill.  Only the Methodist Church and Grove View (which includes Gelderd House) are still in existence, the rest is gone.                                             From an Old Postcard of Gildersome 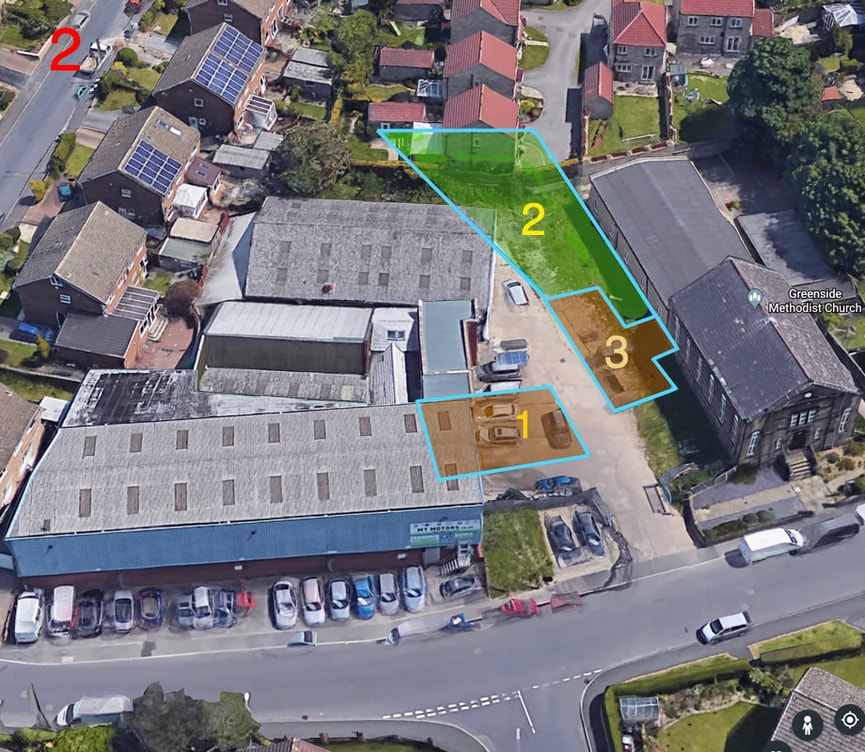 Gildersome's Workhouse (or Poorhouse) occupied this site between the Methodist Church and automobile dealership from the 1700s until 1872, its approximate location is indicated by the brown and green shaded areas. Number 1 is the Workhouse which contained an office with space for meetings of the Overseers of the Poor and probably accommodations for inmates. Number 2 is a vegetable garden tended by the inmates. Number 3 is a barn most likely containing extra living space. When the number of poor receiving aid exceeded the workhouse's occupancy limits, to handle the overflow, extra space in nearby cottages would be leased by the overseers.                                            From Google Maps 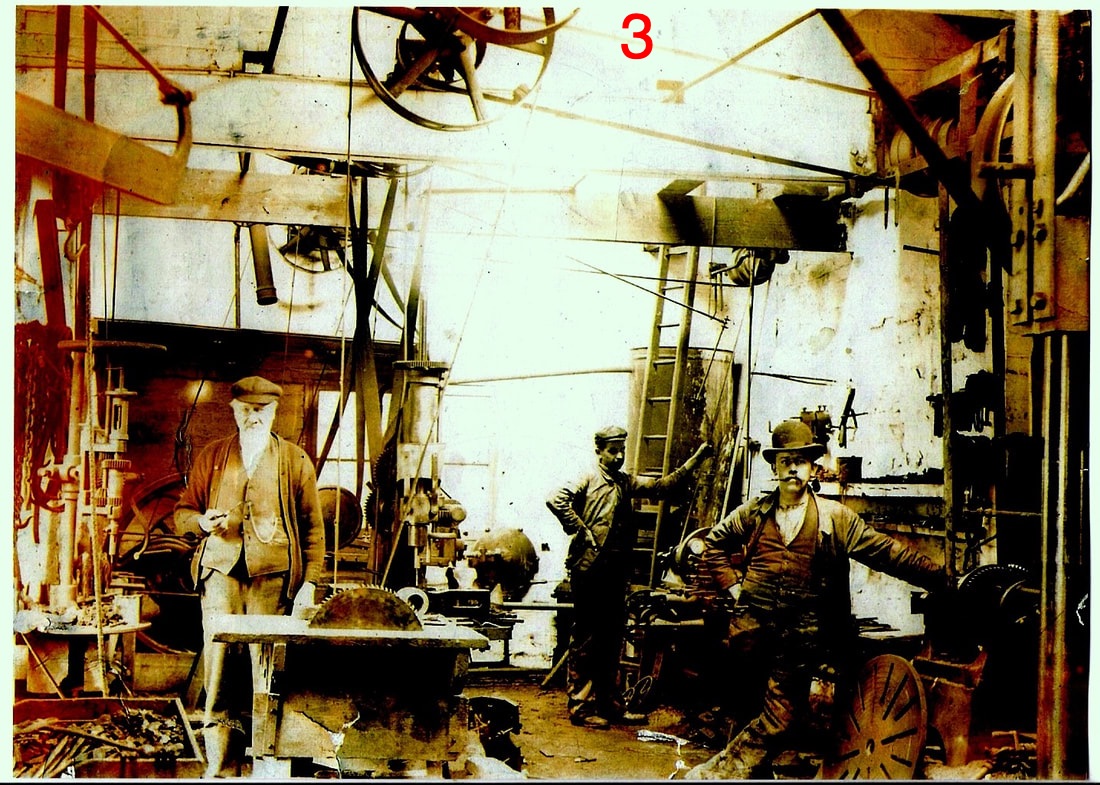 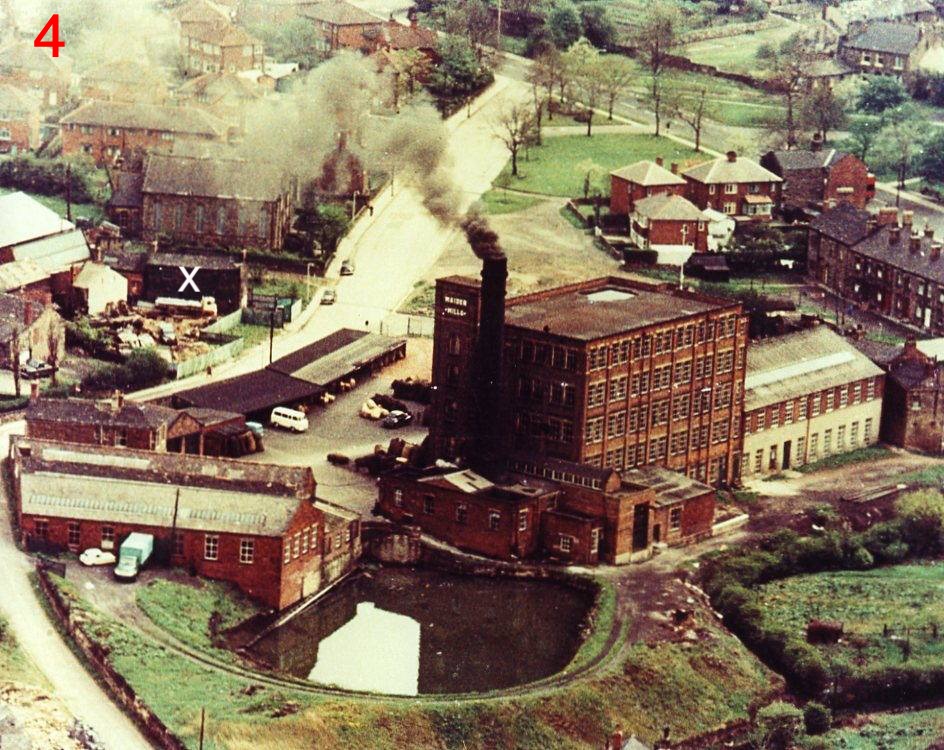 In this circa 1970 aerial photo of Town End and Maiden Mills, many of the old buildings captured in photo 1 (above) have been removed. Gone are Sharp's House and Barn, The Old Factory Yard, the Miner's Arms, the School on the Green and Clayton Fold. Most of Beever's Fold has been demolished except for Peat Drewery Ltd. (its location marked with an X). Before Peat Drewery engineers, this was the site of Steward and Sowden's Ltd. millwright's shop, shown in photo 3, above. In the upper right corner is the Old Cobbler's Shop, extant, and behind that is the rear building of Hall Fold, the front section appears to be gone.
Photo courtesy of Peter Aldred 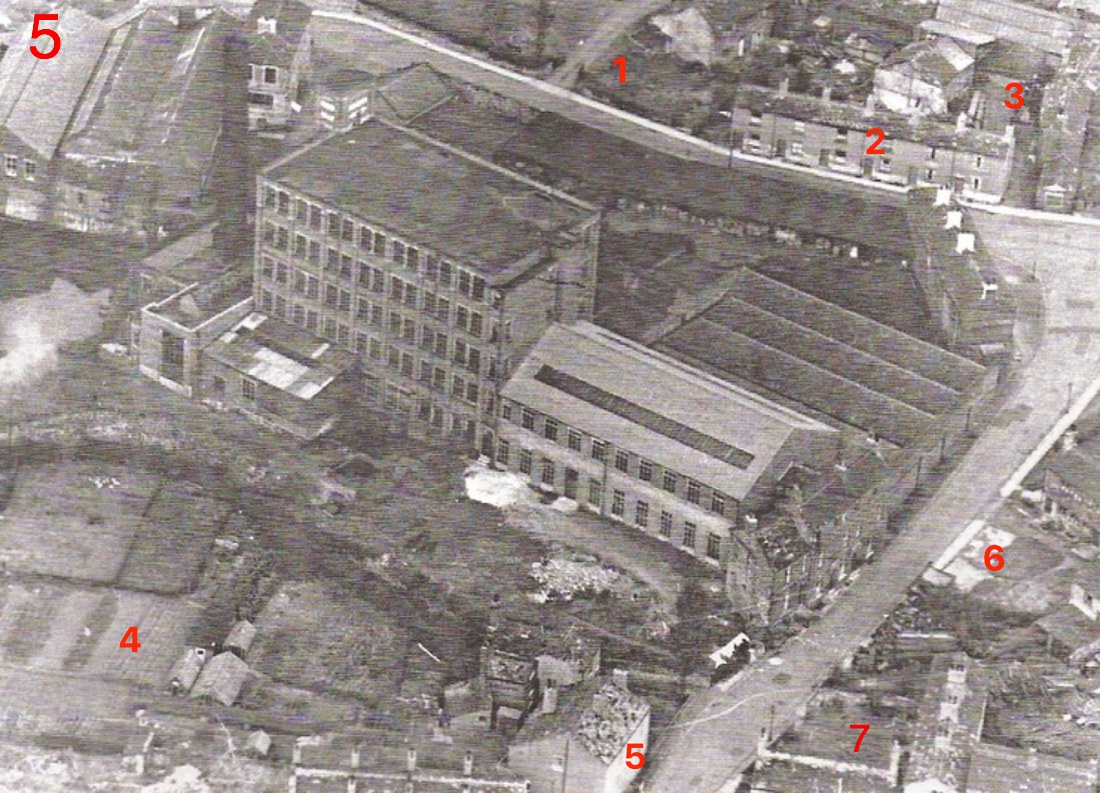 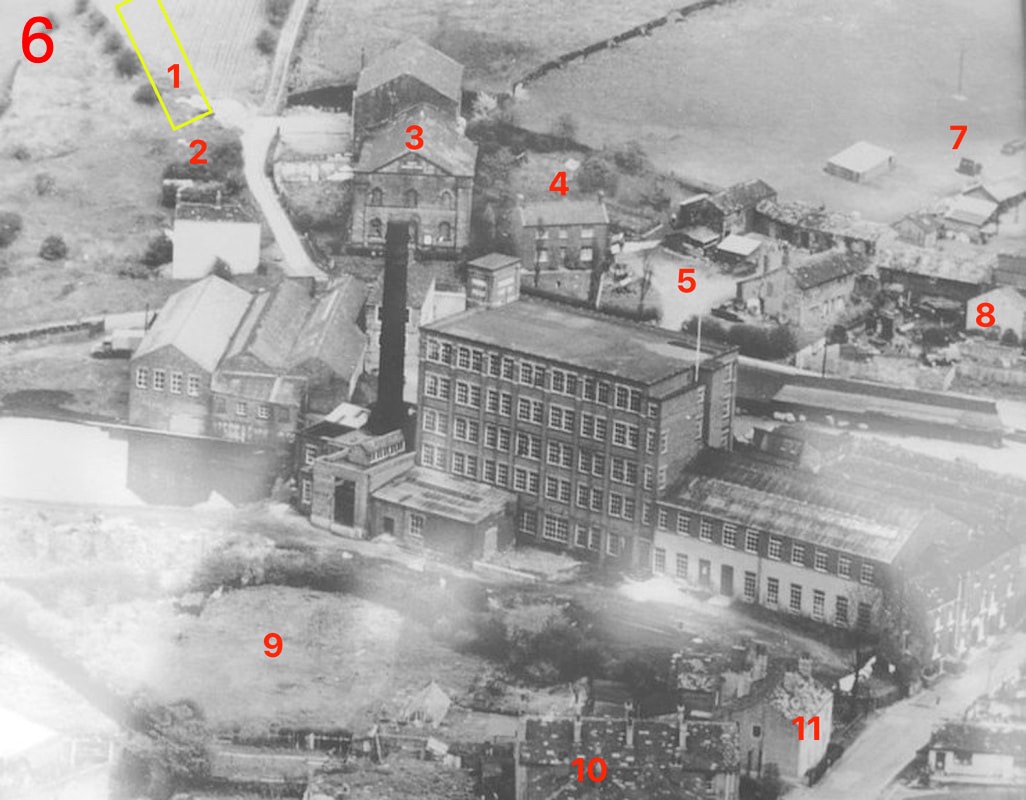 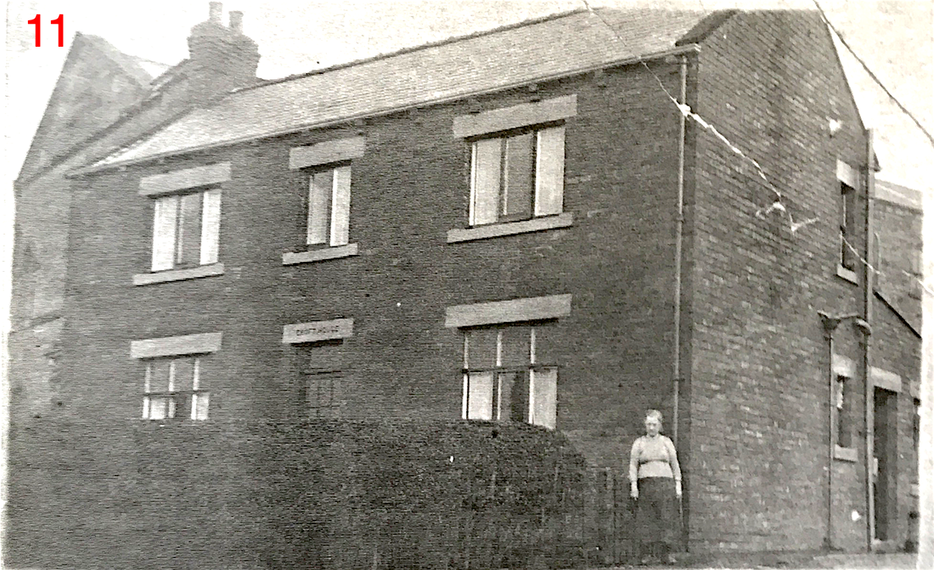 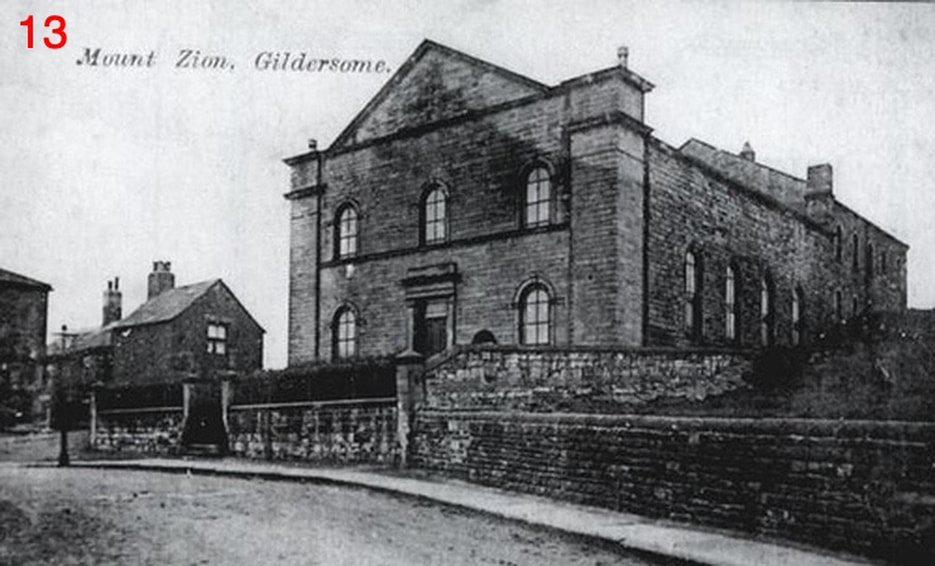 Mount Zion Methodist Church, adjacent to Harthill Lane, is now gone but the Sunday School, seen behind the church, remains and is divided into several private residences. The following is from P.H. Booth's ​"History of Gildersome":

​Mount Zion was formed by persons who seceded or were expelled from the Wesleyan body, and had for their place of Worship the old School in the Bottoms. In 1863 (May 29th) land was bought from Lord Cardigan at Harthill for the purpose of building the present Chapel. Adjoining this land were two small cottages with garden - the total area being 156 yards, belonging to the Township. To get consent for the sale a Town’s Meeting was called on December 24th, 1863. It was held in the old Town’s School, under the Chairmanship of John Ellis. The Notice calling the meeting was signed by the Rev. A. G. Kinsman (Minister) Thomas Bedford (Churchwarden) Thomas Clough and Jeremiah Smith (Overseers).   (Continued below) 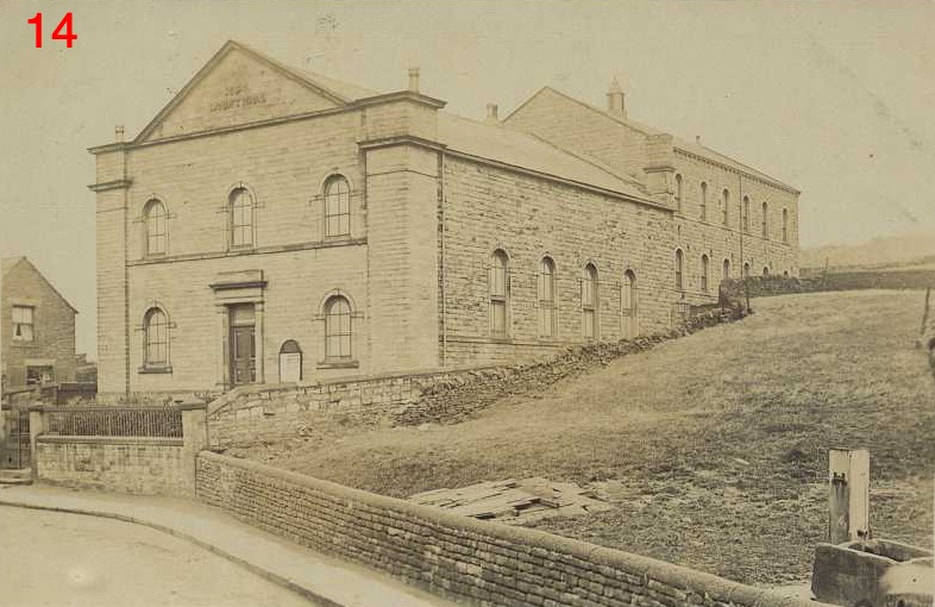 The empty space to the right of the church, seen in this 1910 photo, is now occupied by Croft House.

(continued) Plans for the Chapel were prepared gratuitously by Mr. Chas. Sands of Birstall, and the work carried out at a cost of £1,200. The members of the Congregation did all the excavating during the evenings and on Saturdays. The Chapel was opened on April 12th 1865. Sermons were preached by Rev. J. H. Carr (Birstall) and Rev. J. Guttridge (Sheffield). A Public Meeting was held, over which J. Fearnside, Esq., of Bradford, presided, the principal speaker being Rev. J. Haslam. The sum of £510 14s. 11d. was raised by subscriptions and collections at the opening services.
The first Trustees were Messrs. Samuel Hall, James Holliday, Albert Sowden, William Dixon, Robert Brooke, William Lister, Samuel Cawthorne, George Dixon, Edward Marshall and Joseph Sowden. In 1889, the old School being too small, land was purchased from Lady Cardigan, adjoining the Chapel in order to build a new School. Plans were drawn by Mr. S. S. Holdsworth of Gildersome in 1892. The Foundation Stones were laid by Mr. Henry Booth (Gildersome), Mr. Wilson Topham (Tong), Mrs. Alfred Page (Armley) and by Mr. Holbert Marshall on behalf of the Scholars. The School which cost​ £2400 was opened in November 1893 by Mr. William Mart (Leeds). 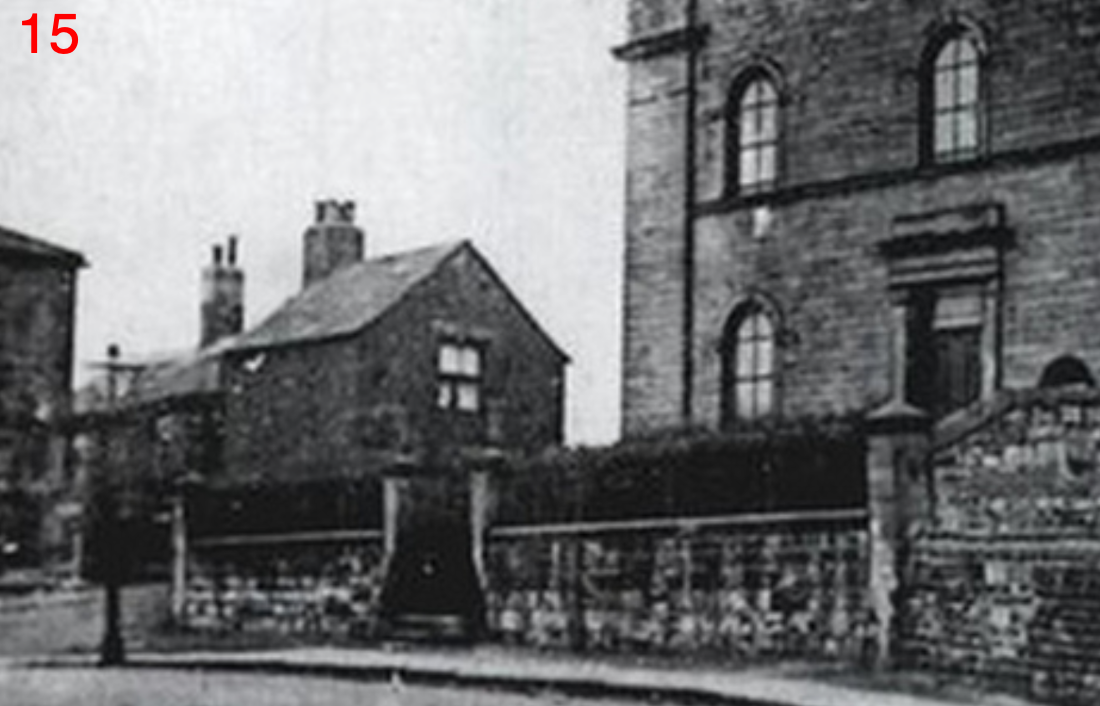 ​These two cottages (one behind the other) across Harthill Lane from Mount Zion Chapel, were utilised by Gildersome's Guardians of the Poor to provide extra living quarters for the poor when the Workhouse near the Green was full. 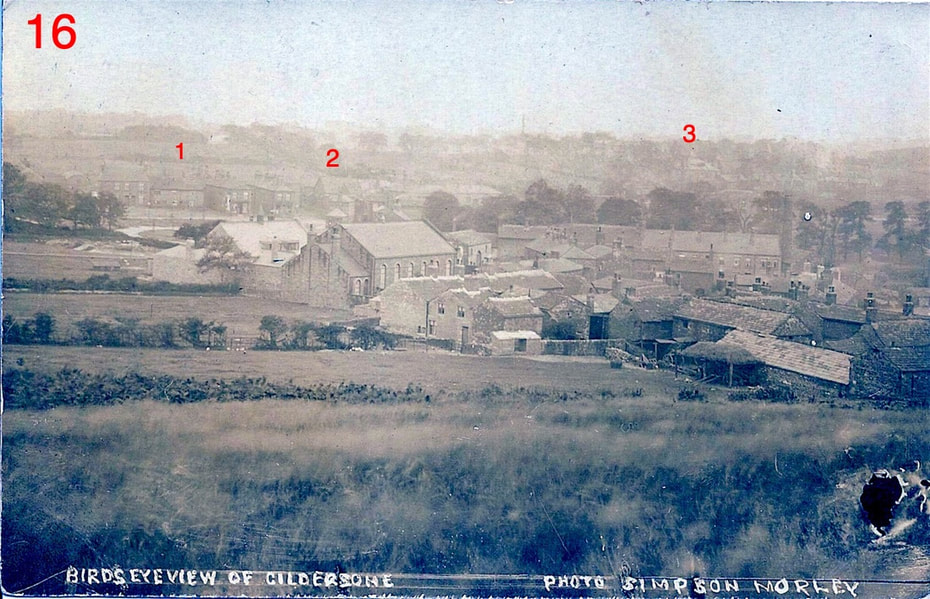 In the above photo, taken circa 1910 from Harthill, the buildings fronting the NE side of Town End are in the foreground with the Greenside Methodist Church situated centre left. The jumble of buildings on the left, closest to the camera, belong to Croft House Farm. Above and left of the church is the Town Green leading into Finkle Ln. The line of trees to the left of the Green is the lane leading up to Harthill House, the lane is now called Graham Walk. The darker line of trees running from the centre to the right edge is along Town St. Numbers: 1 is Victoria Place on the Green, 2 is the Primitive Methodist Chapel and 3 is Belmont House.   From an old Postcard of Gildersome 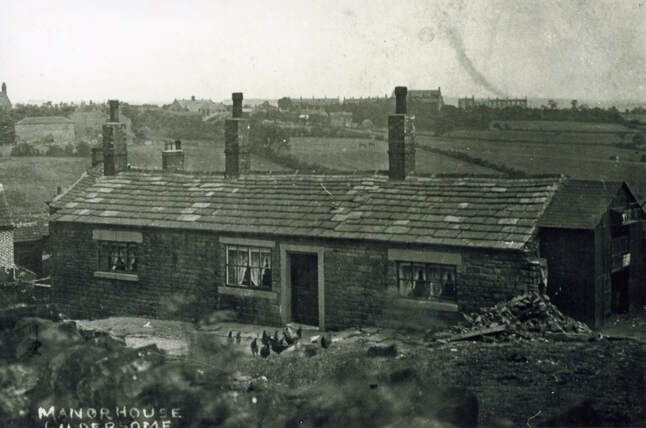 The Old Manor House sat north of Harthill Lane practically opposite the old Methodist school. Most or some of the "Manor" was probably erected in the 1400s or 1500s, possibly with two stories and a thatched roof, but there's no telling how many alterations or rebuilds have taken place over the years. This photo was probably taken around 1910, Gildersome's "skyline" along Church Street can be seen in the distance. Just below the Manor, out of sight in this photo to the left, sat a pinfold where farm animals were impounded in lieu of overdue rents or where wandering strays were held for collection by their owners. The pinfold was mentioned in a 1638 deed but must have certainly been quite a bit older. Though it was called the "The Manor," and was held in demesne by Gildersome's lord since the middle ages, it's doubtful whether any of its past lords ever lived or spent the night there, instead the property was the abode of the lord's overseer who managed his affairs in Gildersome. The earliest mention of an overseer in Gildersome, Francis Walker, was 1711. In 1889, the Manor's owner, Lady Cardigan, put the property up for sale which eventually sold in 1900. It was around that time that the Manor's second storey was removed.     Photo courtesy of the Morley Archives 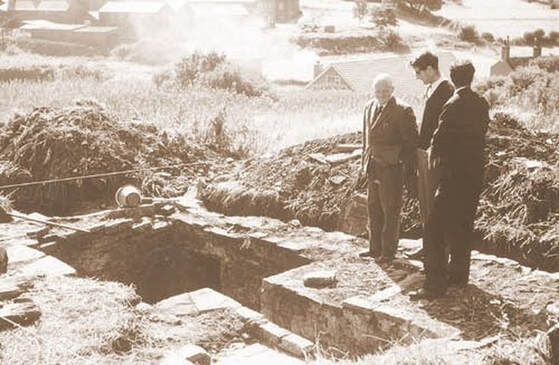 Archaeological Dig at the site of Gildersome Manor, 1967. The "Manor" was demolished in 1953. In the '60s, a plan to build a new structure on the site spurred members of the Yorkshire Archaeological Society into action. At the time, and even still today, there was very little documented evidence about the Manor so, to hopefully clear up some of its mystery and armed with an old map that pinpointed its site, a full archaeological investigation took place from 1966 to 1967. According to a report, written upon completion of the dig, only footings and a root cellar were discovered, nothing gave any clue as to the original date of construction nor were any artefacts found.                      Photo courtesy of the Morley Archives. 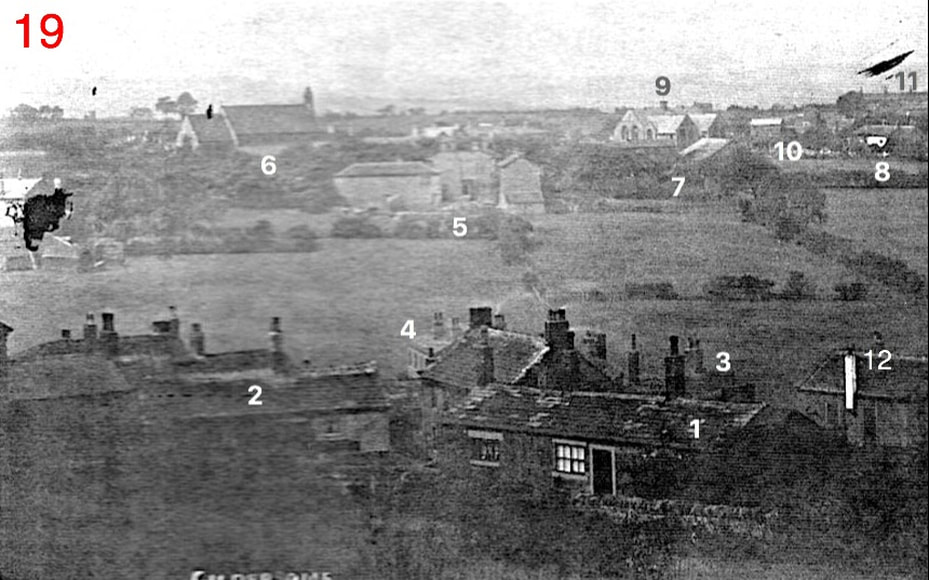 This wonderful panorama was probably shot from near the summit of Harthill around 1910. Along the lower left edge can be made out the thinnest slice of Zion's Sunday school (extant) and above that, hidden by the tear, was site of the Liberal Club at the time (later the site of Springfield Mills).      From an old Postcard of Gildersome 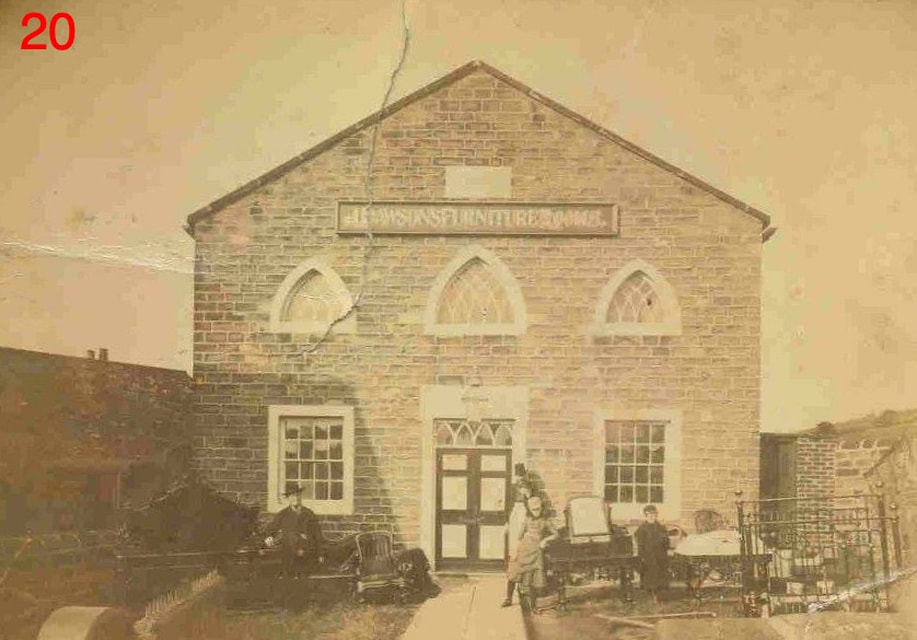 Prior to 1805, the Methodists met in a house that was located between Gelderd House and Mill Lane. According to P. H. Booth, the house had a stone upon it that read: MMR 1748 (Methodist Meeting Room). This furniture shop owned by the Dawson family (above), captured prior to 1911, was Gildersome's first and oldest Wesleyan Chapel, built in 1805. When a new Wesleyan Chapel (Greenside) was built in 1886, the old chapel appears to have been either leased out or sold, it was time from then until 1911 that the old chapel became as a furniture shop.  In 1911 the Pentecostal Church occupied the chapel.       Photo courtesy of Joyce Smith 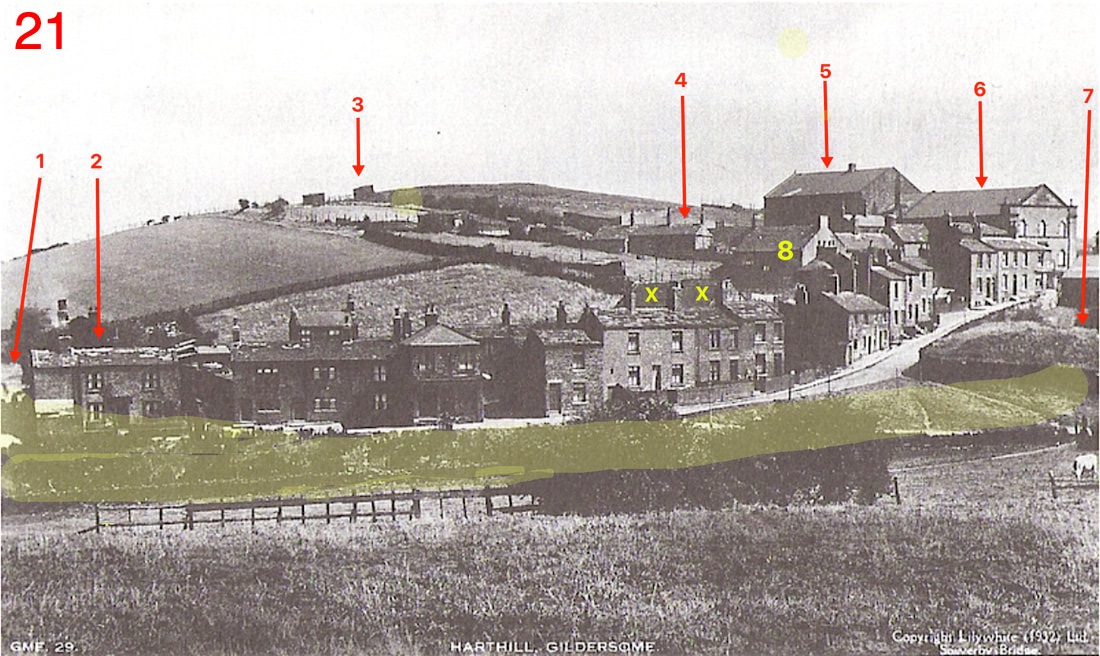 Harthill & The Bottoms. It's the considered opinion of this History that Gildersome in the Middle Ages began its existence as a mining camp engaged in extracting an extremely rich exposed strata of iron ore  which ran at least as far as the Green (the yellow shaded area). Evidence indicates, that at some point in time, perhaps the 15th or 16th centuries, the pond (#7) was constructed and the shaded area, then called Stony Gate, became a mill race servicing a mill located either at Lepton Place or Nursery Bottoms. From the start the mill would have powered a bellows for smelting ironstone, later, when iron smelting was no longer profitable, it was probably used for  grinding grains. Should this hypothesis prove to be correct, then the Bottoms is likely to be the oldest area of settlement in Gildersome.  If so, the location of Town End (to the right of Zion chapel and out of picture) begins to appear more logical..       From an old Postcard of Gildersome
The three photos above courtesy of Peter Aldred 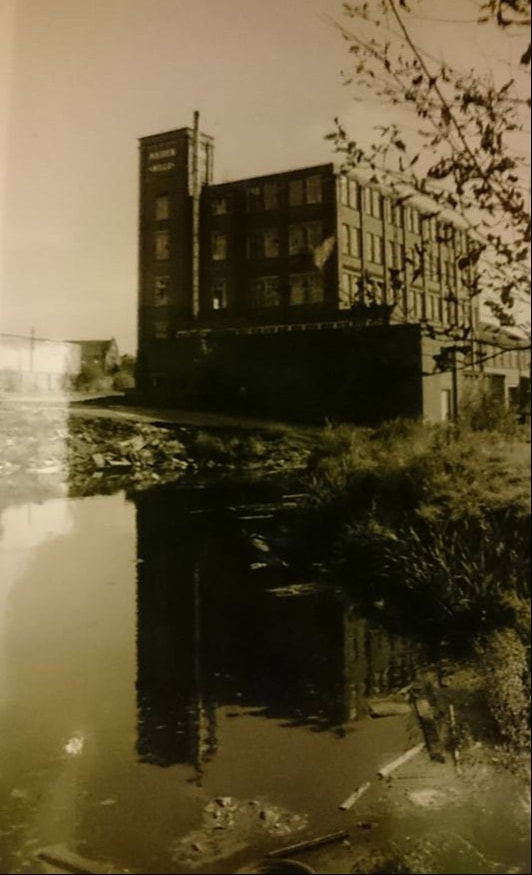