The Old Chapel Morley Protest April 1663                                             by  Charles Soderlund  ©  2018
​Last year, 2017, while searching for ‘Gildersome’ references in the West Yorkshire Archive’s Quarter Session collection on Ancestry.com, I came across a 1663 court case which I believe has great historical significance for the town of Morley and sheds new light on the days preceding the Farnley Wood Plot. Before going further and for those who might not know, I’ve included Ancestry’s own description of its Quarter Session records:

​Quarter Sessions were so-called because they met four times each year. The court was presided over by the Justices of the Peace, the most important officers in local government. They had both a civil and a criminal jurisdiction, and before 1888 they also had an administrative function. Civil cases usually appear in the court’s order books and criminal cases in the indictment books. The West Riding Quarter Sessions was a peripatetic court which moved around the county. Cases for Wakefield, Halifax, Huddersfield and Bradford were heard at the West Riding Quarter Sessions. Leeds, as a large town, had its own Court of Quarter Sessions which was separate from the main county court.

​The document that attracted my attention was a full page record of proceedings at a Pontefract court dated the 12th of April 1663. My first impression was that it was written in Latin which was common at the time, but a closer examination revealed that the document was actually written in English, though in a difficult to read restoration era script. Joshua Greathead’s name leapt out at me, then Thomas Smallwood’s, deposed vicar of Batley, then Thomas Oates of Morley and John Smith, John Dickinson, and Jeremy Boulton of Gildersome. Except for Smallwood, all these men were implicated in the Farnley Wood Plot, six months later. When it came to deciphering the whole document, I could only pick out several words but overall the ancient handwriting had me at a loss. One bit I did manage to read was, ‘did contemptuously meet att Morley the fifth day of April last past’. To say that my interest was piqued would have been an understatement. Right before me was what I presumed to be a warrant written six months before the Farnley Wood Plot, concerning an incident at Morley, serious enough to call for the arrest of twenty two men, some of whom were later arrested for their role in that doomed insurrection. I consulted all the usual sources, Smith, Scatcherd, other restoration era Yorkshire histories and, of course, the Farnley Wood Plot but found no reference. I soon came to the realisation that what I was looking at was a completely unknown and unique bit of West Yorkshire history, but what was it all about?

​I sent a copy of the original scan along with various enhanced versions to my third cousin, Brian Appleyard in Australia. Brian and I have many similar genealogical interests and for over a decade maintained a long distance working relationship. He had transcribed many old wills and deeds and recently had been of great assistance to Lorraine Smith in providing provenance for her book ‘Journey of a Lost Manuscript’, about the discovery of a Gildersome deed of Elizabethan age, recently found between the pages of an old book in Australia.
​
After I had taken a crash course in old English script, Brian and I haggled for several weeks over the correct transcription of the Morley document. We only debated the finer points and the correct meaning of certain words for it became clear that the document was indeed an arrest warrant for demonstrators who publicly performed a religious service at Morley’s Old Chapel contrary to the recent Act of Uniformity. We completed the transcription, with a few minor compromises, and now present it here, the final version:

Pontefract 28 Day April 1663
​
For as much as this County are certainly informed that Thomas Smallwood George Foster and Henry Brooks all of Topcliffe Joseph Roades of Woodkirk John (Silver?) and Henry Jefferson of Haigh Hall Thomas Oates Samuel Ward Robert Halliday and Abraham Dawson Thom Craister And Thomas Atkinson all of Morley John Smith Joshua Greathead John Dickinson Jeremy Boulton And Willm Scott all of Gildersome Samuel Hird Joseph Boamont Richard Brigg Nathaniel Booth and Michael Brigg all of Batley, did contemptuously meet att Morley the fifth day of April last past under Items of public worshiping contrary to ye Late article of Parliament and its behavior pleaded These are therefore, in his Majesty’s name to will and require you that forthwith upon sight thereof you apprehend the bodys of the said persons above named and then convey or cause to bee conveyed before some of his Majestys Justices of peace within the said Ryding To enter into recognizance with Sureties For their personal appearance att the next Quarter sessions of peace to be holden for Ye said Ryding to answer your promises and further to be pleeded right according to Law. Fayle not in the due execution hereof As you tend his Majestys service and will avoid the Pill of the Contrary.

Dated at ye said sessions The day and year above said high constables and bailiffs witness said Ryding their deputy.

Unfortunately, no punishment was mentioned and we presumed that the charges were dropped after Mr Halliday also swore an ‘Oath of obedyense in open Corte’, the same as in the case of the five ‘malefactors’ mentioned above. What seems particularly odd to me is that those who received oath taking as their sentence seem to have been dealt with very lightly, uncommonly so, given the severity of the charges.

Robert Halliday’s verdict was one of seven which have been found to date and the only one, so far, to be translated. It was chosen because the clarity of the scan made each word easy to read. The other six await translation but appear to my untrained eye to be similar in wording to the Halliday version. I’ve checked with the West Yorkshire Archive Service and the October 1663 Quarter Sessions appear to be missing.

Of the twenty two offenders named in the original arrest warrant, I've found that nine were apprehended and charged. Perhaps some of the July Quarter Session records have gone missing or those named but not arrested remained at large until the suppression of the ‘Northern Rising’ and the Farnley Wood Plot eclipsed the incident.

During the Restoration era in Yorkshire, the protest at the Morley Old Chapel may have been the the largest demonstration of its kind and certainly the most violent. It's extremely interesting that a treasonous act of such proportions appears to have gone unreported. Only in these few Quarter Session records can any mention be found. Perhaps the affair was officially suppressed or, as suggested above, the memory of the event was drowned out by the uproar over the failed rebellion.

A brief mention of a few at the protest who had a strong tie to Morley and Gildersome seems appropriate:

Thomas Smallwood, was very well known. He had been previously indicted at York for having demonstrated at Halifax and for saying this about Charles' Queen Catherine, a catholic: ‘the whore of Babylon is rising and setting up.’ For that remark, he lost his seat as Vicar of Batley.

Thomas Oates of Morley was executed for his role in the Farnley Wood Plot.

Joshua Greathead appears to have been on the payroll of Whitehall for some time. He used that money to enlist agents, spy on rebel activity and spread false rumours. For that he was rewarded handsomely by King Charles II.
​
John Smith, and Jeremy Boulton of Gildersome were at the Farnley muster and were subsequently arrested along with John Dickinson, who was not. All three were later released. Contemporary Court documents confirm that, through Greathead, all were on the payroll of the sheriff of York prior to their arrest.
The Aftermath of the Protest at the Old Chapel:

In 1650, during Cromwell’s regime, a trust deed signed by Lord Thomas Savile had been granted to lay impropriators (dissenters) containing, ‘a parcell of land called the Chappell yeard wherein the Chappell at Morley now standeth.’ Among the eleven trustees who had signed the deed on behalf of the lay congregation were Thomas Oates, Joshua Greathead, and John Smith, all of whom were later participants in the Chapel Protest and the Farnley Wood Plot. After the Farnley commotion subsided, control of the Old Chapel passed into the hands of the Church of England and its use by any nonconforming congregation was forbidden.

It was, however, soon after the times of the Commonwealth that its greatest improvement took place. Scatcherd says that this is accounted for by "the discovery made in 1825 of several ancient scrolls on the walls of the chapel, whose inscriptions indicate with unerring certainty the time when they were written.

- My son, fear thou the Lord and the King, and meddle not with them that are given to change.
- Blessed are the peace-makers for they shall be called the children of God.
- Remember now thy Creator in the days of thy youth, while the evil days come not, nor the years draw nigh,
when thou shalt say, I have no pleasure in them.
- He hath showed thee, O man, what is good and what doth the Lord require of thee but to do justice, to love
mercy, and walk humbly with thy God.
- Lord I have loved the habitation of thy house, and the place where thine honor dwelleth.

Near to the one we have first-named, was the Royal Coat of Arms, with the letters “C.R.” (Charles Rex) on each side of the crown, and also above the lion's head, and the date 1664 underneath the whole. Near to the last-named text, was once the Lord's Prayer; and on the other side of the King's Arms it was discovered that there had formerly been the Apostles' Creed; and over the whole there had once been the Commandments. At that time it was common to affix upon walls, passages from Scripture calculated to keep up a feeling of loyalty, and to inculcate a spirit of submission to the restored dynasty. Scatcherd, in his History, gives it as his opinion that the inscriptions in the Old Chapel were levelled at Major Greathead, Captain Oates, and all those who had been privy to the Farnley Wood Plot in the year 1663, and also as a rebuke to the Republicans through out the land. 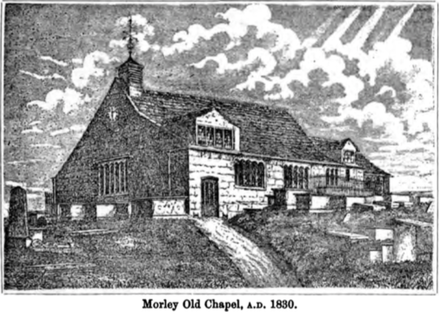 In Scatcherd’s opinion above, he cites the Farnley Wood Plot as the Church of England’s sole motivation for the Chapel’s strict takeover and banning of its Presbyterian flock, but this opinion was made without his knowledge of the Chapel Protest. He didn’t know that the Morley dissenters’ zealous resistance to the Act of Uniformity on the 5th of April 1663 surpassed that of any other church protest in Yorkshire, or perhaps in all of England. It’s my contention that the protest was the prime motivation for the stern message and coat of Arms painted on its chapel walls and the resulting sanctions to its dissenting assembly.
​

After 1663, the only service read in the chapel, if there was any at all, came from the Book of Common Prayer and any practice that deviated from that book was prohibited. Now and again, during the next 24 years, a dissenting minister did successfully petition to perform a service on the chapel grounds but not within the chapel itself. In 1687 a second trust deed was signed, reaffirming the lay congregation's possession of the chapel and its grounds but they were still forbidden the use of both. Things eased a bit with the passage of the Toleration Act (1689), dissenters were permitted to worship freely in the recently built Parsonage House, attached to the church, but the consecrated chapel remained off limits. Finally in 1693, after a 30 year ban, the chapel was restored to its dissenting congregation.

Thanks to Clive McManus and Brian Appleyard for their excellent contributions.

For more on Joshua Greathead and the role he played during this period, go to:
https://www.gildersome.net/joshua-greathead.html